A Bleak Future For Senior Citizens 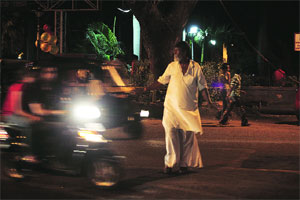 I read a very disturbing news story few days ago. An elderly couple trying to cross a busy thoroughfare in Pune, had managed to cross it up to the road divider point and were waiting for the traffic on the other side to slow down, when a speeding car  brushed past  the gentleman. He fell down on the road and was very fortunate to survive. Some kind-hearted people helped him and the couple somehow managed to reach home.
My first reaction to this story was naturally this. Why did this couple tried to cross the road at some random point instead of a pedestrian crossing point? How can we blame the vehicle driver for this? But when I read full details of the episode, I realized that such a disaster can strike almost any senior citizen. Apparently, the gentleman had an appointment with an eye specialist as he was suffering from loss of vision. Since there was no one else to help him take to this specialist, his wife, a senior citizen herself, agreed to accompany him. After his eyes were examined, the couple came out on the road and tried to hire an auto-cab to go home.  Number of cab drivers who were passing by, refused point blank to take this elderly couple home. The nearest signal light, which had some resemblance to a pedestrian crossing, was quite far away and the elderly couple was in no physical condition to walk up to that point.  They realized that they were also not in a position to keep standing there on the road any longer and wait for a cab. In a desperate move, they decided to cross the busy thoroughfare to try and get an auto cab. One may argue that the couple invited the disaster themselves and no one can be blamed for their plight.
Can a cab driver refuse a passenger if the fare meter flag on his cab is up? Why no pedestrian crossings at convenient points are provided by the Municipal Corporation? Why no policemen could be contacted on such a busy arterial road for help? What should a senior citizen do if he or she needs some help in a public place? Questions and questions!  But no one has any answers.
As we move from an era of joint families to nuclear families, it strikes me that the senior citizens alone will have to bear the brunt of this social change. Just a generation back, no senior citizen would have had required to go on his own to consult a physician. He or she would not have had to do grocery or stand in queue to pay his electricity or phone bills. Some younger members of his family would be always available to assist him or do the job. Social changes that are now sweeping through our societies have made just this group very isolated, helpless and vulnerable.

It may be argued, that senior citizens from western or other developed nations, have been facing this kind of situation for some considerable period. It is just, that the time has come now for seniors in India, to face the new realities. So why this much ado about nothing. In this argument, we are unfortunately ignoring the de facto situation in these countries, which can not even be compared with situation in India. In these societies, special facilities are created by the local authorities to serve the elders .There are mechanically operated escalators for crossing the roads. Bus or other transport doors are designed in such a way that a physically weak person also can enter or leave the bus. Bus drivers will wait at bus stops until elderly passengers enter the bus and are seated properly. For people who are economically better off, taxicabs can be called by making a call and above all, real help from Police or Medicos, is just a telephone call away. Special transport vehicles at nominal costs are available for seniors in most of developed societies.
Senior citizens in India, mainly who live in cities, today find themselves living on an isolated island. Because of the heavy congestion and traffic on the roads, they are afraid to move about and remain confined to their dwellings. If they happen to stay in an apartment, their situation is even worst. They cannot climb the stairs and are afraid to use the lift, which may fail anytime because of the vagaries of electrical power and generally poor maintenance. The sense of insecurity dominates their minds as day after day, news stories of elderly people being robbed appear in the press.
Feeling of loneliness is perhaps their biggest woe. Younger generation obviously does not find their company particularly enjoyable and physical impossibility of traveling to meet other elderly persons increases their isolation. There is also a continuing feeling of having become an unwanted and useless member of society. Only a generation back no such problems existed. Most of the elderly were part of a larger family and were well taken care off and happy. An easy evening stroll could take them to other seniors for a chat. They generally had much less feeling of isolation and boredom.
Some people advocate the idea that such elders should move to special condominiums where all facilities are available for the elders. I personally loath to accept this idea. There is nothing more depressing for a senior citizen than to meet and interact day in and day out only other aged seniors. Besides, given the cost of such dwellings, very few seniors can really afford to move to such places. 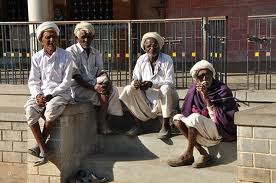 Better medical facilities, newer medical treatment and more effective medicines have increased the longevity or the life span of most of Indians. This also means that there would be more and more isolated and lonely individuals confined to four walls of their apartments. These people still have enough interest left, in life. They like to watch theater, enjoy music concerts and would like to listen to speeches from litterateurs and persons of eminence. They still like a bite of exotic foods and drinks, occasionally. They want to buy and read new books. They also want to look fashionable and trendy and would like to buy new apparel. In short, they still want to and are capable of enjoying many good things of life. But the congestion in the cities as well as changing social situation is putting them inside four walls from where there is no escape but a maddening feeling of greater and greater isolation and frustration.
For senior citizens , the future really appears very bleak.
at 1:29 PM