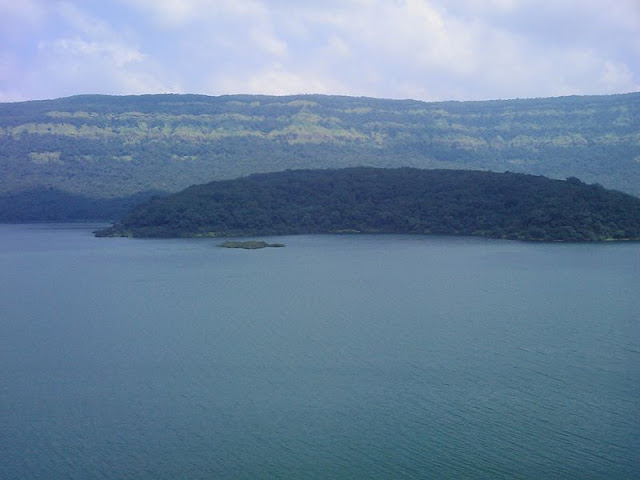 A huge water reservoir fed by the unimaginable quantum of rainfall of 2.5 to 5.0 meters during southwest Monsoons, is located on west coast of India. This reservoir, situated in between towering ranges of the Western Ghat or Sahyadri mountains, was created in 1960 by damming the Koyana river, whose source or headwaters are located on the Mahabaleshwar plateau. The water reservoir is huge, having a total area of 344 square miles and a depth of about 260 feet and total quantity of water held roughly 10 x 1010 Cubic feet. 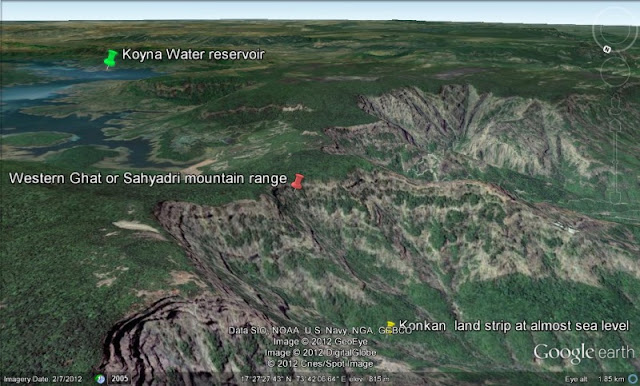 What is unique about this reservoir is it's location. The reservoir located in deep forests of Western Ghat mountains and at an height of 3675 feet above mean sea level is separated from the Konkan land strip on west coast of India, just by a range of towering mountain range. This Konkan land strip is almost at the sea level. This geographical fact and the resulting hydro-electric potential was recognized ever since the first survey about 100 years ago. However it took further span of fifty years to put this potential in Megawatts of electrical power.
During first three phases, huge tunnels were excavated in the mountain ranges to divert the reservoir water to the mountain face on the west. From this point, water is taken to huge underground turbines through underground water tunnels to generate power. It was realized during 1980 that during summer months, when the water level falls below a certain level, water can not be diverted to the power house and generation of electrical power slows down. To recover more water, a hole was blasted on a lower level so that water can continue to flow to the power house even when the reservoir water level has dropped down to as low as 630 meters above mean sea level. This additional water was mainly used to generate power during periods of peak demand.
After this lake tapping, the height of the water inlet point became 618 meters and when lake water level was 630 meter or above, water could be fetched from the reservoir in enough quantity for power generation. The Government then decided to supply a quantity of about 20 TMC of water to some drought prone areas from the reservoir. This additional water outlay would reduce the water level below 630 meters and flow of water to inlet tunnel at 618 meters was further restricted. It was there fore decided to lower the level of the inlet point to 606 meters,
This was easier said than done. A 4 Km long tunnel was required to be dug 40 meter below the surface of the water almost along the water, rock contact at the lake bottom. Near the point of tapping, it had to be dug very near the lake bottom, so that an opening could be blasted in the final protective rock. This new tunnel had to be connected to the old tunnel. This tunneling work was completed in just 100 days. 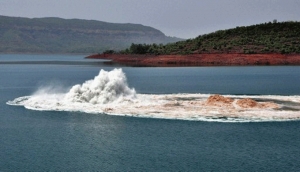 For the final lake tapping or blasting of protective rock, 1600 Kg of 'Bonogel-711' explosives manufactured by Swedish company Bofors were used. This final blasting was done recently with a North American specialty company as chief consultants. Since the water level in the reservoir at the time of blasting was 645 meters, considerable difficulties had to be faced. As the explosives were detonated, entire reservoir vibrated with force as if there was an earthquake and blue waters of the lake rose by almost 15 feet before surging waves spread all around. 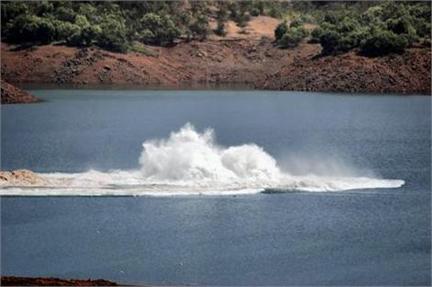 The additional water is expected to generate further capacity of 1000 Megawatts, increasing the total capacity of the project to 1960 Megawatts.
It must be said that it was a job very well done.
2 May 2012
at 2:46 PM