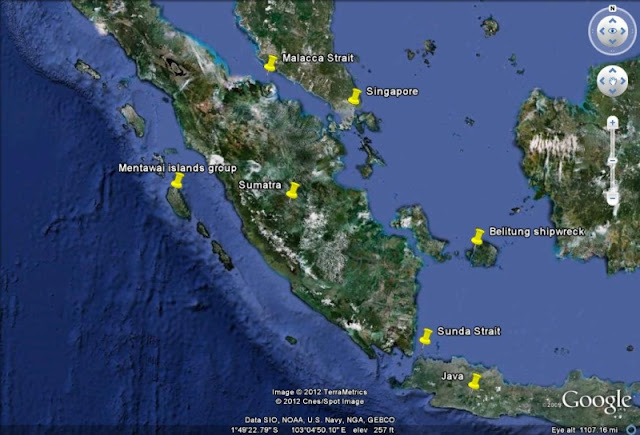 Mentawai are a group of islands on the west side of the island of Sumatra. Over an year ago, these islands were the first to face the slamming by the giant Tsunami wave that eventually battered Indonesian island of Sumatra. The giant Tsunami wave pushed into view, 4 shipwrecks near the coastline of Mentawai islands. One of the shipwrecks is now in just 20 feet of water. National Committee of Underwater Heritage, made up of representatives from 15 ministries and government bodies of Government of Indonesia says that these four wrecks are part of a huge number of 463 wrecks, that have been discovered off Indonesia coast. International experts, referring to documents about missing ships from China and other countries, believe that actual number of ships lying on the ocean floor is in the order of ten thousand. 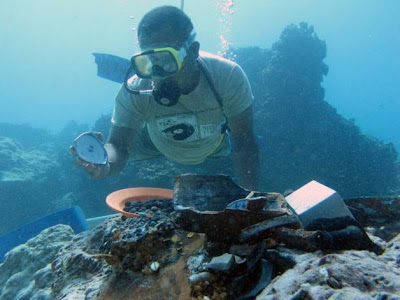 Most of these ships that went down were laden with precious cargo just like the Cirebon and Belitung shipwrecks that we have seen in Part I and Part II of this series of articles. Like these two shipwrecks, the ships, not yet salvaged, are likely to be loaded with valuables such as 9th century ceramics,imperial-quality gold boxes , exquisite jewels, funeral urns and inkwells. If salvaged and sold, they can bring in of millions of dollars for Indonesia. 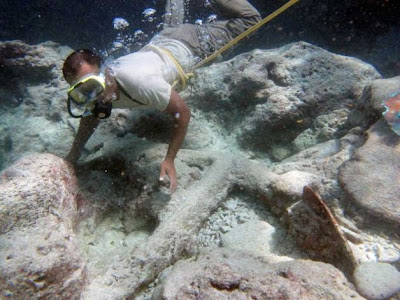 The Mentawai shipwreck, for example, is of a ship that belonged to Dutch East India company and the tidbits that have been found by enterprising fishermen around the wreck, include broken pieces of blue-and-white ceramics, a tiny perfume bottle, a sword handle and broken wine flasks, one of which is still sealed with a wooden cork. 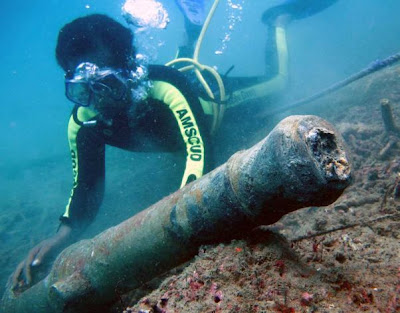 Fishermen have located some bronze cannons and anchor of the ship. Government maritime officials in Mentawai, are trying to protect the shipwrecks from poachers and fishermen, who want to break into the wrecks, as no clear Government policy about the issue is forthcoming. As things stand now, salvage operations are all stopped. Indonesian Government earned very little in the Belitung shipwreck and as a result further salvaging work was stopped. Considerable political wrangling is going on now in Jakarta to sort out the issue. 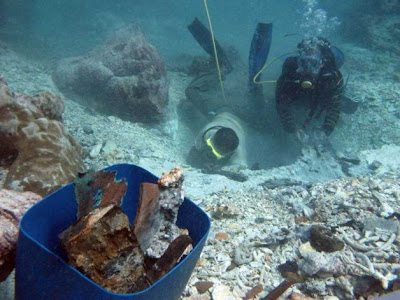 The major issues here, that are now being debated, are the serious objections raised by marine archeologists regarding this whole concept of salvaging shipwrecks for commercial gains. Archeologists feel that salvagers are recovering only things that are monetarily valuable, and that might represent just a small percentage of the entire collection of artifacts on the wreck. The salvagers may open the shipwrecks by blasting through or by breaking down historically or archaeologically important artifacts.
The case of the Belitung shipwreck is being presented by Indonesian Government as a sample case. Out of 40 Million Dollars paid by Singapore, Indonesian Government got only 2.8 Million and a number of artifacts, not wanted by Singapore. They feel that they have received a raw deal. Indonesia also has not yet adopted the 2001 U.N. convention on protecting underwater cultural heritage though in 2010 it passed a law protecting underwater cultural heritage. No rules or guidelines have been yet framed.

Many archeologists feel that commercial exploitation of the shipwrecks and the publicity given is creating an unnecessary demand worldwide for shipwreck artifacts. Because of this criticism, Smithsonian Institution from Washington D.C. cancelled their proposed exhibition of Belitung shipwreck artifacts. Many believe that museums should not display these items at all.

As the controversy rages, salvaging companies justify their operations by saying that otherwise the artifacts would be just looted and all information would be gone forever. If the commercial angle is lost, not many would be willing to salvage the artifacts. Meanwhile Millions of Dollars worth artifacts are just lying on the sea bed in need of protection.