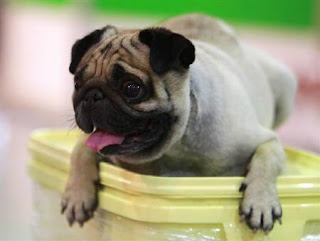 Whenever I get out of my house on foot, I have to walk some distance by a sidewalk, which leads from my house. Naturally, every morning, when I go out for my walk, I have to use this sidewalk. I find this portion of the side walk, where I have to tread each and every day, rather interesting and firmly believe that it could well be considered as a subject for research. The sidewalk is fairly wide, but the portion of the sidewalk near the curb, is designated as Bicycle path. Because of this, there is always a chance that I might encounter an occasional bicyclist on this part. I therefor normally try and avoid this side of the sidewalk. Unfortunately, rest of the sidewalk has tall trees grown on it, in a completely haphazard fashion, which ensure that unless I am very careful, I could score a direct hit on one of the tree trunks. Two years ago, this complete walkway was paved with interlocking concrete blocks. But within six months, parts of these blocks were dug up and a pipe line was laid below the surface. After laying the pipe line, original dug up soil was just heaped on the top and the original concrete blocks were never replaced. This has converted the sidewalk into a path, which is full of potholes and mini hills formed by leftover loose earth and the sand brought for construction. Many people here find walking on this sidewalk, with all the obstructions, so daunting that they prefer to saunter on the main road itself, bearing full risk of the vehicular traffic coming from behind.
This sidewalk stroll in the mornings, brings up another major risk of facing a disastrous calamity, if I am not watchful or careful enough. Many ardent lovers of dogs, use this sidewalk for giving morning exercises to their beloved Canis familiaris. These guys are usually seen with a chained dog towing them. All these friendly canines have one basic habit. They are always pleased to carry out their defecation procedures on the sidewalk only. While walking on the sidewalk, I have to be extra vigilant and alert that I avoid the defecated excretions and in no case step on these. In all developed countries, I have seen such dog lovers, when exercising their dogs, are always ready with a plastic bag and a small spade to pick up and pack the dog poo. The poo is immediately gathered and put into the bag and later disposed of in a special trash can reserved for such purpose. In India, roads and sidewalks are supposed to the normal places given to dogs by birthright, for their daily defecation and the dog owner has no responsibility towards cleaning the poo even if this can result in an occasional punishment for an innocent walker.
I had always thought that this professional hazard faced by pedestrians in India is a special hardship reserved for Indians. I have just found out that my fellow pedestrians in a developed country like Taiwan also have to brazenly face this calamity. Frankly, this has given some solace to my mind. In Taiwan, decade of 1980 brought a remarkable affluence to that country. As people became richer and richer, number of dog owners grew almost exponentially. In this country of 23 Million people, the number of domestic dogs has crossed a figure of two hundred thousand. In addition to this there are number of undomesticated stray dogs roaming the streets, who have been just given up by the owners. All these animals are using city streets mainly as their toilets. To get rid of this menace on the city streets , city officials from the city of Taichung tried out a pilot scheme in 2009. They started giving coupons worth 3 Dollars for every Kilogram of dog poo deposited with them. They provided a budget of 1,30000 Taiwanese Dollars for this programme. City officials had felt that with this scheme, people would become aware of the menace on the streets and would take care in the future. This scheme however, ended in complete fiasco. The budgeted amount was spent any way, but people continued the old practice and the streets still remained dirty with poo.
City officials of New Taipei city, which is adjacent to the old Taipei, have launched a new awareness scheme in the month of August 2011. Under this scheme, people depositing dog poo with the city officials are being given lottery tickets, where the prizes are gold biscuits valued between 500 to 2000 US Dollars. Recently results of the first lottery were declared, According to city officials more than 4000 people have deposited more than 14500 plastic bags containing dog poo with city officials. They however say that it is difficult to find out whether the people, who deposit the dog poo, are the dog owners or some people on the street, who are doing this to get gold biscuits.
This lottery scheme is now suspended. City officials are not ready to say as yet whether there is an increased awareness amongst people about this menace or Taichung city history would be repeated and people would just continue with their old ways. City official fear that the bacteria and roundworms in the dog's poo affects small children with a disease called Toxocariasis which upsets the stomach.
This Taiwanese experience is really a bad news for developing country like India. When it is so difficult to create awareness amongst citizens of a small and rich country like Taiwan, we do not seem to have any hope at all in India.
at 11:01 AM