Observing the earth through cloud cover and darkness 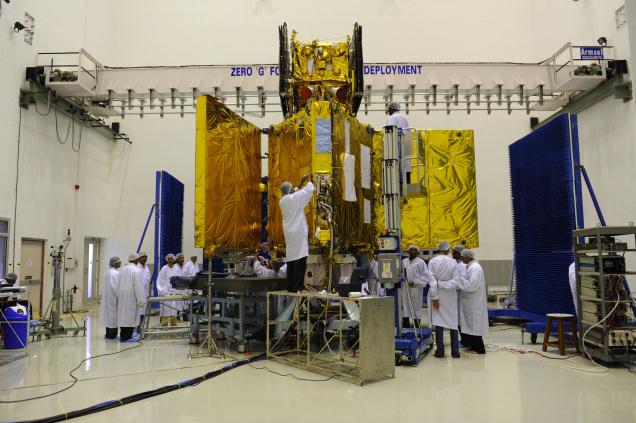 Remote sensing or imaging satellite technology is not something new for India. Indian scientists had launched first remote sensing satellite more than two decades ago. Since launch of this first satellite IRS-1A in 1988, ISRO (Indian space and research organization) has sent up over a dozen earth-viewing satellites. All these satellites had varying resolutions but had on board optical imaging cameras. Which simply meant that these cameras can not see through cloud cover or in darkness. Even then, these satellites have created a large user community within the country. Their data is also being received and utilized in several other countries.
Remember India's atomic explosions in 1998 at Pokharn, Rajsthan. The entire range of preparations were carried out at night or when there was cloud cover. The result was that satellites of other countries like US were not able to detect any activity on ground and India had managed to keep whole operation as complete secret. From security point of view, this is a big lacuna.
To overcome this problem, Radar imaging satellites were thought off and developed by some advanced countries of the world. These satellites have far greater complexities and are therefore heavy. India did not have the necessary launch vehicles in the past, which could launch such heavy satellites in space. Essentially, these satellites send a radar pulse towards ground and by measuring the time delay between the transmitted radar pulse and reception of an echo from the ground, build a picture of the terrain below. Obviously, in actual practice things are not that simple. Radar imaging satellites use a special technique known as 'Synthetic Aperture Radar' to do the complex job. This technique uses complex processing of the radar echoes received from the same place on the ground so as to simulate a much bigger antenna on the satellite than it actually carries. This greatly increases the possible image resolution. Satellite radar images can have a resolution varying between 50 meters to 3 meters. Here the trade off is between the resolution and the area on ground that is imaged. As resolution increases, less of the ground area can be imaged as the satellite passes overhead. However these satellites can be operated in a a special ‘spotlight mode,' where the satellite will keep looking at a small region on the ground, it will be capable of providing one-meter resolution images. (The best resolution now possible on the ISRO's optical remote sensing satellites is believed to be about 0.8 meters.) To achieve this Radar imaging satellites are equipped with an advanced ‘active phased array' antenna. Instead of a single transmitting device generating the microwave signals, the antenna has a large number of modules that collectively produce the radar beam. By suitably adjusting the signals generated by various modules, the beam can be electronically moved around. Even if a few modules fail, the satellite can continue to function.
India has been building it's own radar imaging satellite since last 10 years. As the radar imaging requirements of the user agencies were urgent, India has launched two Radar imaging satellites made by Israel in orbit from Sriharikota. In January 2008, ISRO launched Tecsar, whose images are used by Israel exclusively for reconnaissance/surveillance . In April 2009, RISAT- II, made by Israel was launched. The images from this satellite are used by India besides images from a Canadian satellite. 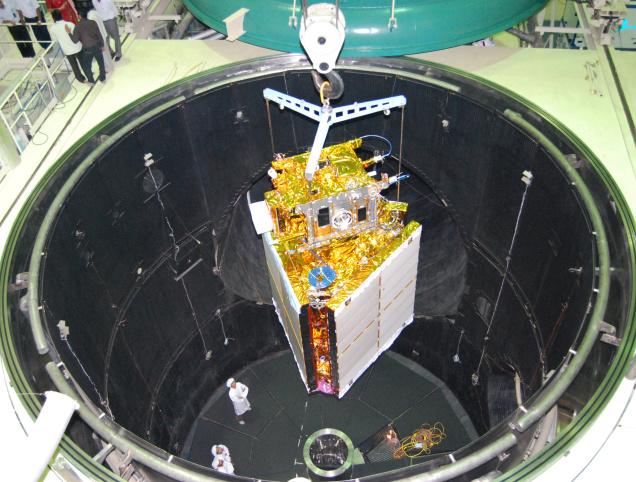 India's own radar imaging satellite RISAT-I is now ready for launching and woulkd be launched from Sriharikota in next few days. The satellite carries a C-band Synthetic Aperture Radar (SAR) payload, operating in a multi-polarisation and multi-resolution mode to provide images with coarse, fine and high spatial resolutions. This satellite weighing about 1,850 kg and built at a cost of Rs. 3.78 Billions, would be launched in a polar orbit at an altitude of 480 km. The satellite's propulsion system would then be used to take it to the final orbit at an altitude of 536 km. The Satellite would be launched by India's workhorse rocket launcher PSLV. This will be the heaviest satellite lifted by a PSLV rocket and to achieve this, more powerful strap- on boosters would be used on the rocket. Standard version of PSLV uses six strap-on boosters with each carrying 9 tons of propellants, where as this version named as PSLV-XL, carries strap-on boosters each carrying 12 tons of propellants. This rocket launcher costing 120 crores was first used in October 2008 to launch India's Lunar orbiting module Chandrayan-I and then again to launch GSAT-12 in July 2011. 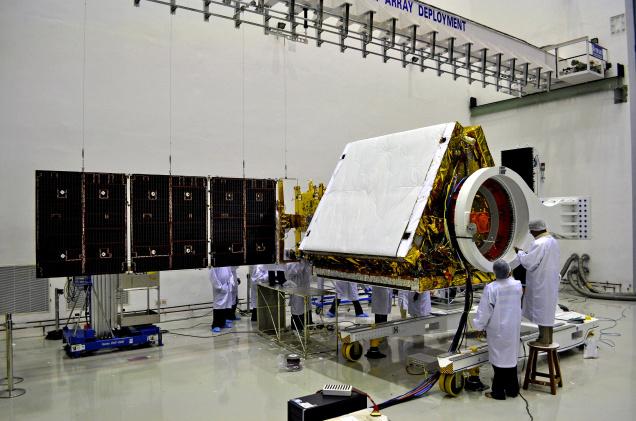 Launch of this satellite would add another glorious page in the history of ISRO as this satellite is expected to take pictures of the earth at all times, through rain, sun, clouds, fog and cyclones, and then relay the pictures back to earth.
25 April 2012 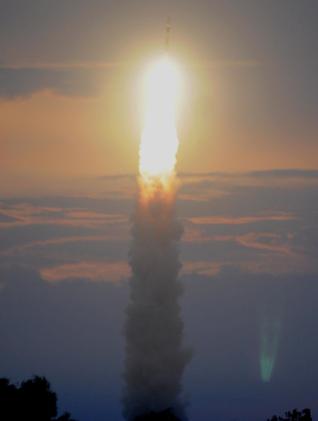 At exactly 5.47 a.m. on 26th April 2012, India's first Radar imaging satellite was launched successfully in its orbit by a 44.5 meters tall rocket weighing 321 tons PSLV rocket from Pad 1 of the spaceport on east coast of India situated about 80 KM from the city of Chennai. 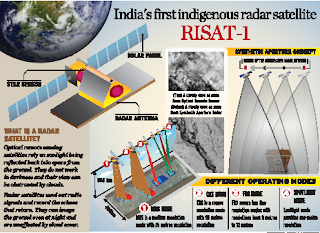 ISRO says that  " once the satellite onboard propulsion system raises it's orbital altitude to 536 km with orbital inclination of approximately 97 degrees to place the RISAT-1 into a polar sun-synchronous orbit, the satellite will begin its daily routine of 14 orbits in about  25 days. During its mission life of five years, RISAT-1 will use its active microwave remote sensing capability for cloud penetration and day-night imaging of the earth surface and provide critical data inputs for a range of applications.