It's 'Holi' time again! On the streets of Srinagar, India) 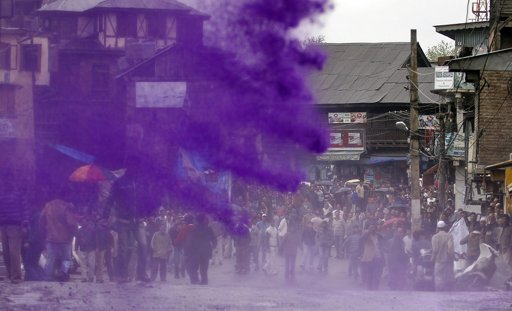 According to the Hindu almanac, the full moon day of the last month of 'Falgun', is known as 'Holi' and a festival is celebrated with great fervour on this day. The traditions say that on this evening, a bonfire is to be lit to drive away all evils. On the next day, it's time for fun as spraying of water and colours on each other is a customary norm. In north India, in particular, the 'Holi' festival and this colour spraying is taken very seriously and huge gatherings of people from all walks of life, spray water and colour on each other and enjoy.
But that full moon day of the month of 'Falgun' came and was celebrated almost a month ago. We are now in the last few days of the new or the first month of the Hindu almanac, known as 'Chaitra'. Yet, most surprisingly, I found photos of a riot of the colours, on the streets of Srinagar, which is the capital city of Jammu and Kashmir state in India. Although, be precise, the colours were spread this time, not by revelers and merrymakers, as happens on Holi day, but by police on the crowds in the streets and incidently, the spray was of only purple colour. 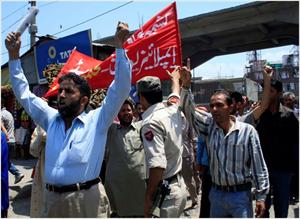 On 17th April 2012, work in the government offices all over Jammu and Kashmir was affected due to a strike called by the factions of of the employees unions under the banner of Joint consultative committee, to press for their demands, which include, enhancement of the retirement age by two years from 58 to 60 and removal of pay anomalies in different cadres of the state services and regularization of daily wagers. Protesting Kashmir government employees in hundreds, took out to streets and assembled at Shaheed Gunj Exhibition crossing and tried to march towards press enclave or the Civil Secretariat. As the employees were marching towards Press enclave, they were intercepted by police near Old Secretariat and were asked to disperse gracefully. However, protesting employees offered stiff resistance and refused to relent. 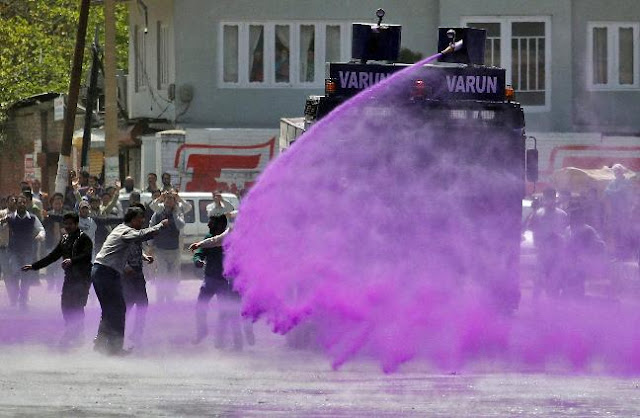 The police resorted to a mild cane charge and when they could not stop the crowds, they brought in the water cannons and the riot of colour just began. The police sprayed the purple colored water on the crowds. 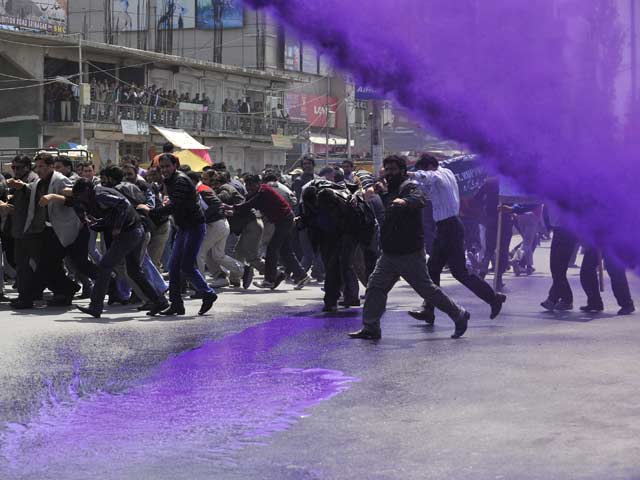 It was also raining at that point of time and soon, in no time, roads, passer byes and employees all were dyed in purple colous. The crowds dispersed afterwords but it was almost 'Holi' time on the streets of Srinagar.
18th April 2012
at 12:27 PM