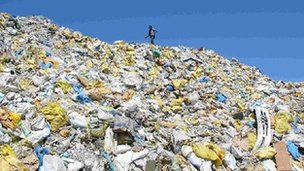 When I go for my morning walks on every day, I cross a fairly large housing complex, built for the employees of an institution run by the federal Government. This colony consists of about eight or ten apartment buildings, with plenty of space left around the buildings. A stone wall, at least 6 feet high, has been built around the colony. It is therefore hard to see, what's going on inside, standing on the road. Two days back, I found that a part of this compound wall was demolished for some construction work. It was therefore possible for me on that day, to have a glance inside and actually see the arrangements. To put it mildly, I was astonished to see a huge heap of trash and garbage just along the wall. There must have been a garbage container kept there, somewhere below the garbage heap, but as things looked, no trace of any such container was seen as the garbage heap had completely covered the garbage container underneath it. There were plastic bottles, cans, household items, food containers and split plastic bags containing leftover food. I really felt shocked that such a glaring source of ill health and diseases just sits there along a major road and the nearby colony dwellers are doing nothing or are complacent about it. Only explanation for this terrible state of affairs that I could think was that there must have been some dispute between the colony managers and the Municipal corporation regarding garbage collection, which must have resulted in this alarming situation.
When generation of garbage turns large scale, how to dispose it off, is always a huge problem faced everywhere in the world. Few nations bury or do land filling with the garbage. Some countries actually export it and create health problems for people of some other poor country. Few decades ago Municipal Corporation of Greater Mumbai used to burn the garbage. Later it was found that this burning created so much of pollution that leaving the garbage alone was much less a source of pollution. For countries having large landmass, leaving the garbage alone is a possible option. However for island or archipelago nations, where landmass is inadequate, disposal of garbage is becoming a major problem. 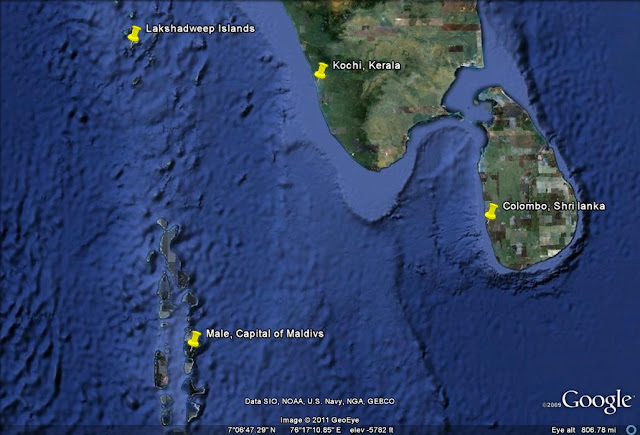 The archipelago of Maldive islands in the Indian ocean, famous for picturesque beaches and natural beauty is also facing this garbage problem in a big way. This archipelago is famous for it's beaches with silver white sands and azure blue seas. Tourism is the main industry in Maldive's. Huge number of tourists from all corners of the world arrive and stay on these islands every year. To cater the demands of these tourists, many luxurious resorts have come up on Maldive islands. These resorts mainly cater to tourists coming from western countries . The lifestyle of these tourists is such that everyday huge amounts of garbage is generated. Maldive Government faces on a continuous basis, a problem regarding disposal of this garbage generated on every day. 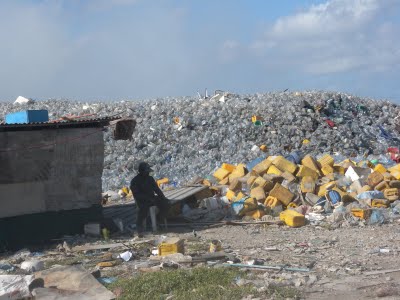 Maldive archipelago consists of 1192 individual islands out of which 200 are inhabited. From these, 26 islands are atolls. Majority of the luxury resorts have come up on these atolls. Islands in the Maldive archipelago, are coral islands and a continuous process goes on here, which creates newer islands out of the sea. About 7 KM from Male, the capital of Maldive's, one such coral island known as Thilafushi is in existence.
About 20 years ago land-fill was done on the coral rocks of the Thilafushi island, to make it acceptable for human use. A jetty was also built here for the boats and barges to dock. Subsequently some activities like boat and yacht repairs were started here. Later, Maldive's luxury resorts found out about this island and started using this island for dumping garbage created at the resorts. Now this garbage has increased or grown up to such a level that it has now started spreading in the sea water. Thilafushi island is now becoming famous as Garbage island. On the backdrop of beautiful Maldive islands with silver sand beaches and azure blue sea water, Thilafushi island has started looking like a blot. One can see everywhere on this island, huge heaps of garbage, rancid and poisonous smoke coming out from burning garbage and also very high pollution levels. Out of the garbage dumped here only a small amount of garbage is actually buried. Many Bangladeshi workers have found employment on this island. These people are seen digging the garbage heaps to sort out the plastic and metals. The plastic is recycled and balance garbage is burnt. This is creating further increase in pollution levels. 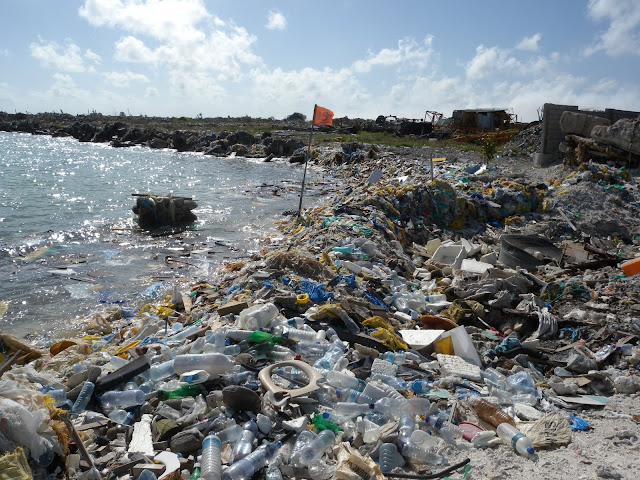 Such large quantities of garbage are now arriving on Thilafushi island now, that it takes almost 7 hours to for a boat to unload its garbage contents and go back. Many barge owners are not willing to wait for such a long time. These barges simple dump the garbage in the sea itself and go on spoiling it. After things have reached such a sorry state of affairs, Maldive's Government has banned dumping of garbage on Thilafushi island for the time being. Maldive's environmental minister, Ibrahim Nayim, however says that Thilafushi can still take in much more garbage, the real problem being inadequate arrangements for unloading and dumping of garbage and the delay caused to the barges as a result.
Another environmentalist for Maldive's, Mr. Ahamad Ikram says that the Government had decided to create bio fuels from the garbage. There has been no progress on that. All the toxic elements from the garbage are being freely allowed to mix with sea water. This has created a huge danger for the environment of Maldive's.
When I read about the Thilafushi or Maldive's garbage island, first thing that came before my mind was the garbage heap in the Government colony near my house in Pune, India. Almost all the major urban Municipal corporations all over the world are now facing problems with effective garbage removal and disposal. I can see on daily basis the inadequacy of the efforts of the Pune Muncipal Corporation for effective garbage disposal. The problem needs to be addressed at the global level. Otherwise it is likely that every major urban habitat would have heaps and heaps of garbage collected everywhere and a major health problem would face all of us.
at 10:55 AM