Smashing cars with a tank; new faces of Tourism 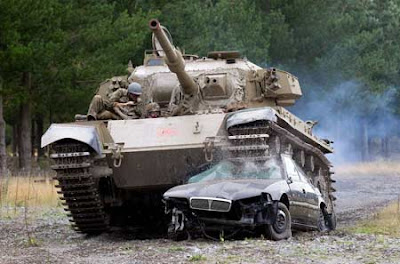 For most of the people, tourism means a well planned tour to few beautiful spots in the hills or to a beach, good food , plenty of relaxation and some side activity like trekking or snorkeling. For few people a visit to historic places or temples is a must when on a tour. Yet there are few, who hate this kind of humdrum stuff for a holiday. They look for real adventure like climbing some mountain spur or want to do deep sea diving or at least some bungee jumping.
A New Zealand company in Christchurch has now started offering a total new dimension in tourism adventure. It allows it's customers to smash cars by using a real world war II tank. This company calls itself 'Tanks for Everything' and says that the car smashing adventure that is offers is the highest adrenaline pumping adventure on this earth. Owner of this company, Jonathan Lahy-Neary says that “I think it maybe releases repressed frustration, to go and crush something with a tank. If you’ve had a bad day, it’s a pretty good stress reliever.”
The company owns a Soviet era T-55 tank, which looks very conspicuous and inconsistent in the beautiful green rolling meadows of New Zealand. It was purchased by the company from an arms dealer in Hungary. The pride of the operation is however a Maximus, a British-made Centurion battle tank, weighing 52 tons and powered by a V-12 Rolls Royce engine, which saw service in Vietnam in the early 1970s. 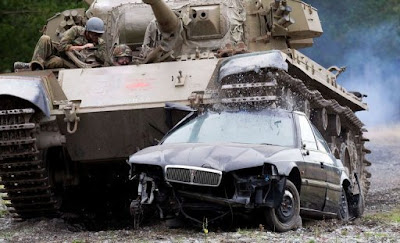 A company employee, Matthew Sandland says that these Centurian tanks are available in plenty. The dealers have more than 100 such tanks obtained from Iraq and Afghanistan and the tanks are fully battle ready. The company actually paid extra money to the dealer to get the gun deactivated, otherwise the import to New Zealnd would not have been possible.
Company owner Lahy-Neary, a tank buff since childhood, says that importing the beasts into New Zealand was harder than purchasing them, with police and customs officials hesitant and unsure of dealing with his request. He had to do mountains of paperwork and had to get many permits. Surprisingly, even when the guns on the tanks were deactivated, it was necessary to take firearms licenses for the company people. 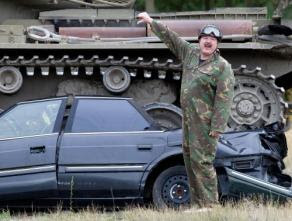 New Zealand has a US$ 2.5 Billion adventure tourism industry and car smashing is the latest attraction. The company sources the cars from local junk yard and returns the same in smashed condition. Some of the company customers, who tried their hand at this car smashing say that 'It is quite an experience.”
29 March 2012
at 11:46 AM