Tiny Singapore has a small river known as Singapore river. This river originates probably in Pandan reservoir in the south of the island and is fed by Sungei Ulu Pandan and Alexandra canal systems in the Clemanti area. Kim Seng bridge can be considered as start of the river. This 3 KM long river, flows to the east to merge with Singapore straits. The mouth of the river near the sea, known as Marina bay, is a fairly large and spread out water body. About 5 or 6 years back, Singapore Government undertook a huge project to convert this body of water into a sweet water lake by constructing a barrage known as Marina Barrage. Simultaneously entire waterfront area development also was started with entertainment areas, cassino, museums and shopping areas. 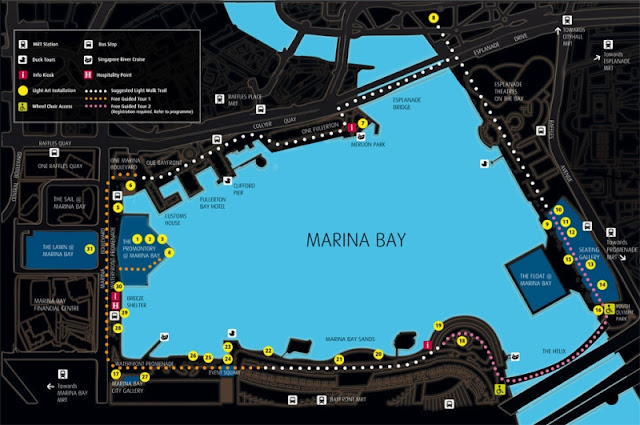 I remember visiting Marina bay sometime in 2003, when it was a huge open marshy kind of land. Today, the development work is almost complete and this area has turned into a superb commercial-entertainment complex with a plush hotel known as Marina sands and an arts and science museum and a board walk along the perimeter of the bay.
This board walk was the venue of ' i Light' Marina Bay Festival 2012 and was called, Asia’s first and only sustainable light art festival! (I really have an iota of idea why it was called so!) The festival is hosting 31 innovative and dynamic artworks by artists and designers from 17 countries and territories inclusive of those of the students from LASALLE College of the Arts and School of the Arts.
The organizers explain the theme of the exposition as a festival that encourages participating artists to use recyclable materials while adopting energy-efficient lighting technology to promote environmentally-responsible behaviour for a sustainable future. Even alternative forms of energy sources such as solar, kinetic or wind will be used to generate the energy needed to power the art installations. I went round the Marina bay boardwalk looking at the light creations with feeling of awe and astonishment, but I really failed to understand the significance of the theme as related to the exhibits. Here are some of the fabulous creations. 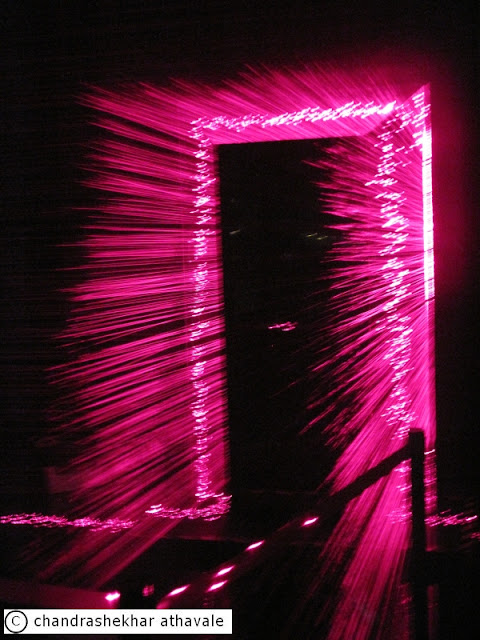 The Gate by Li Hui of China
The artist has used here hundreds of laser beams to frame a doorway to create the sense of a symbolic passage and a path to enlightenment. The effect this artwork creates is absolutely awe inspiring. As I stood before the gate, my body illuminated by hundreds of red spotlights, made me feel like an alien. 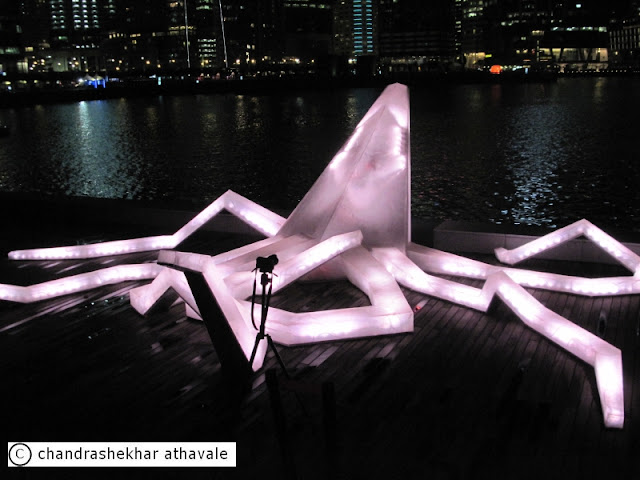 5QU1D by Ryf Zaini of Singapore
The artist creates a large squid like creature emerging from waters of Marina Bay, a hybrid object of the sea and the city, seeking to melt into the urban landscape. An impressive exhibit. 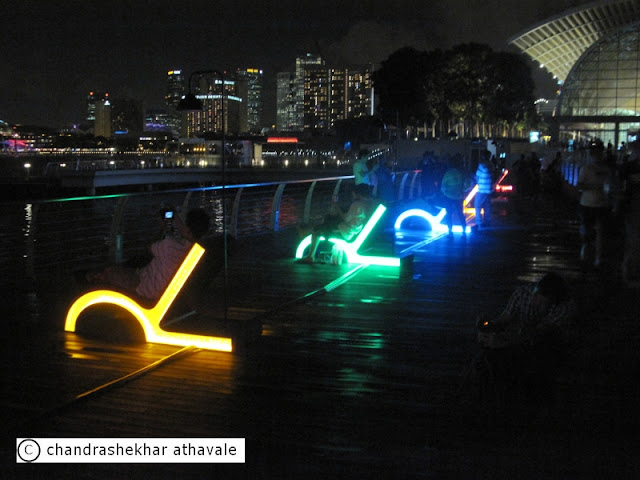 Deck Journey by Zulkifle Mahmod, Singapore
Deck chairs set up for visitors to sit and enjoy a unique spatial experience featuring light and a customized soundscape(?) 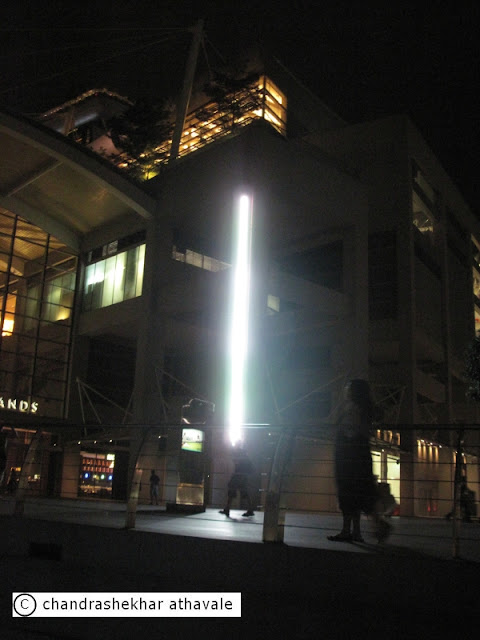 MEGAPOV by Teddy Lo of Hong Kong
Hi Tech Led flash messaging used to project symbols which draw the viewer's attention to concerns brought about by rapid urbanization in the 21st century. This exhibit is fun for kids I thought, did not bring up any serious concerns. 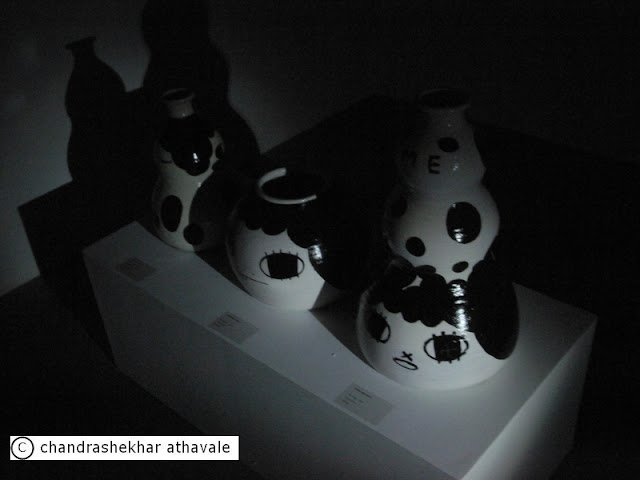 Objects d'art from Tangible Gallery by Wiyoga Muhardanto of Indonesia
It as a darkened art gallery with replicas of famous paintings and objects- d '- art. Visitors need to come up with their own light sources such as mobile to see this. The artist wants to pose questions about the inherent value of art and perspective of the viewer. More about this later. 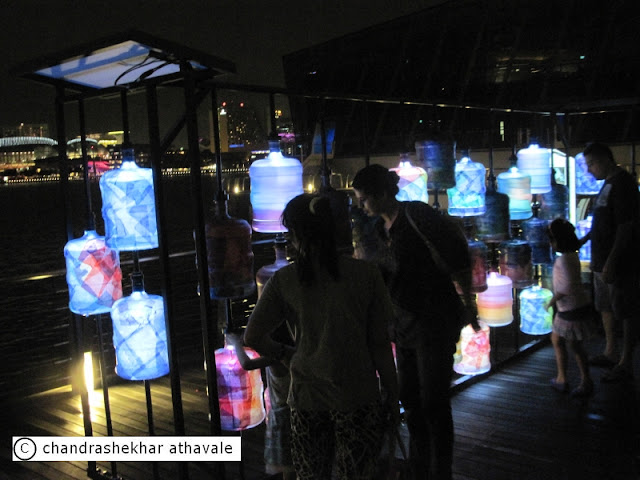 Flow by Oilivia Lee of Singapore
Series of prayer wheels, which light up when turned by visitors and also by solar energy. I liked this. 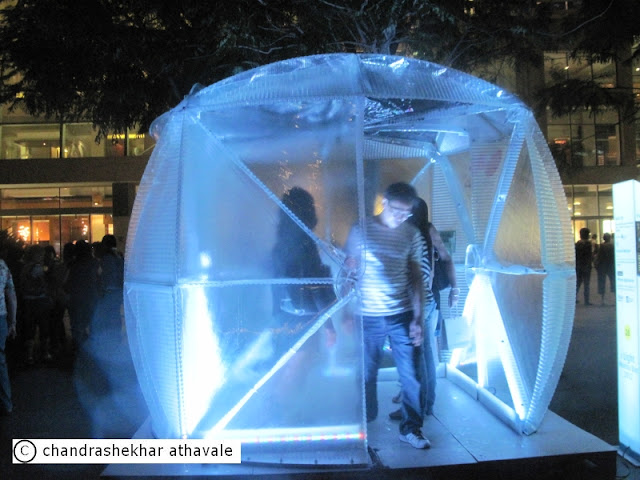 Bio Shell by Shinya Okuda of Japan
A lightweight temporary shelter which artist says would create within visitors a gentle feeling of kinship between humans and nature(?) 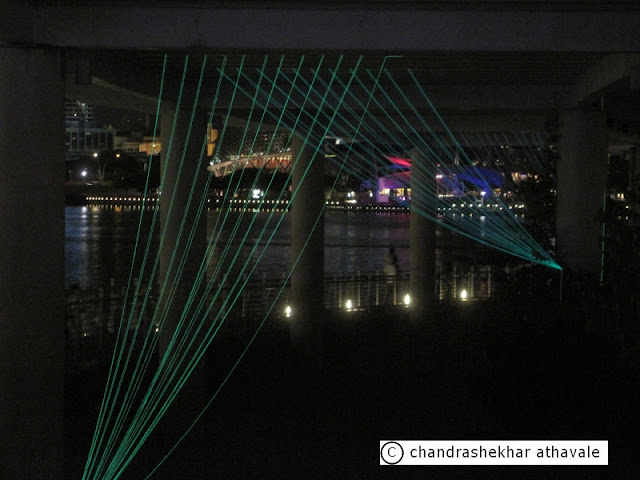 Fancy/Lightweight by Cornelia Erdmann of Hong kong
Coloured LED wires are strung to create a fan like shape. 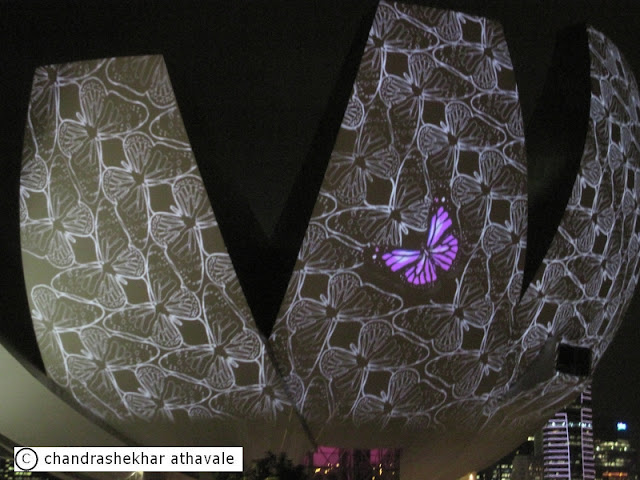 Garden of light by Hexogon solution, Singapore
An animated projection using 3D digital mapping technology on the walls of Arts and Science museum. This was more like an I Max movie.
In all there were 31 exhibits. However, visiting all of them, meant a really strenuous and long walk. So I just gave up. The exhibits which I saw were really good and appreciable for the creativity shown by the artists. Yet, I felt little puzzled with the selection of this theme at this place. Having few candle lights of sustaining light energy on the background of many skyscrapers, glittering with lights and burning megawatts of power seemed little odd to me. Perhaps Tangible Gallery exhibit appeared more relevant and serious to me. It posed a question regarding relevance of art , when basic needs of energy are not sustainable at all. But that is why man is so different from animals. Cavemen drew sketches on walls of caves at a time when human existence itself was so fragile. Overall it was a nice experience.
15 March 2012
at 1:03 PM