Restoring an urban river bed to its natural Eco-system; A Singapore experiment 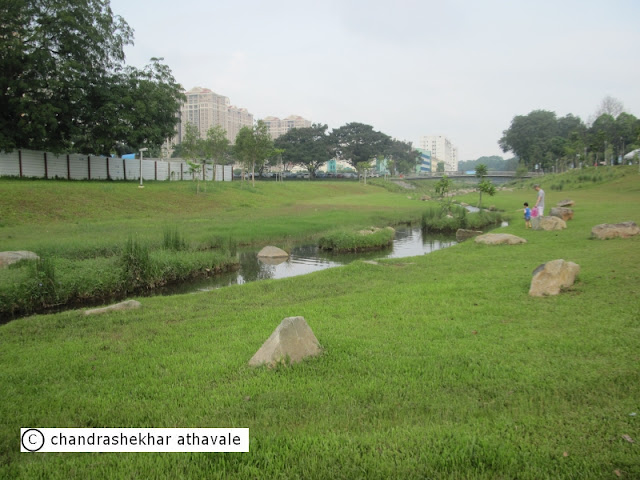 Kallang river is one of the small rivers of Singapore. This 10 KM long river originates from Lower Pierce reservoir in the west and flows down south to meet the Sea near Marina Barrage. This river like all other Singapore rivers has very little water during dry weather and is more like a spring. During rainy water the river can get flooded very quickly, when water level increases rapidly. To have an effective flood control, the western part of the river was converted into a concrete canal with a small channel at the bottom for water flow during dry weather. However, destruction of the natural river Eco-system caused by such canal like arrangement is now well known. Besides this, a natural river bed also can make the area beautiful as parks and recreation areas can be developed along the natural river bed. Kallang river flows for initial part through a park known as Bishan Park. Old concrete canal of Kallang river
Singapore's water agency PUB and the National Parks Board took up in 2009 a joint project for development of old Kallang river concrete canal into a naturalized river with bio-engineered river edges using a variety of plants and bedding materials. This project was the first of its kind in Singapore. What was also attempted was to integrate the natural river bed with a park aims so that the waterway became more accessible to the public to enjoy along with the restoration of the river's Eco-system. 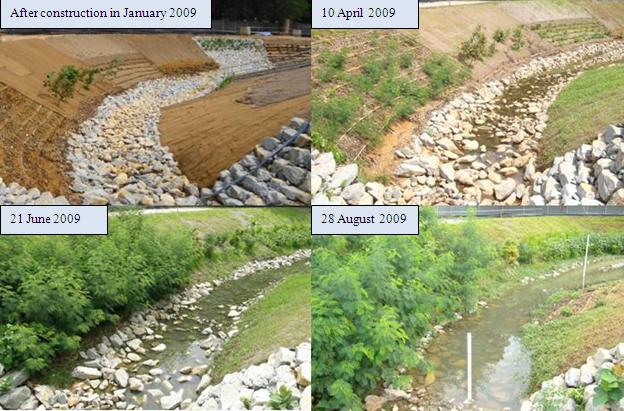 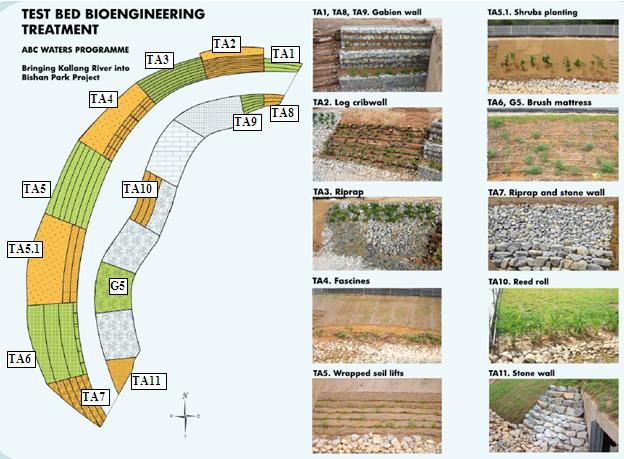 Test bed created for trying different methods for stabilization of side banks
For restoration of the river bed perhaps the most challenging task is the stabilization of slopes on the banks of the river. Bioengineering techniques are commonly used for slope stabilization in European countries. Since no one had used such techniques in tropical countries and Singapore experiment was the first such attempt a test bed was created in in Bishan Park to monitor the performance of such a system in ther tropical climates. It was decided that the most suitable technique, after taking into account the slope of the river bank, type of plants as well as planned recreational activities in the proximity, will be eventually used in the restoaration work on the river bed..
The test bed, 60 metres in length, was located in Bishan Park 2 area. Approximately 10 different types of bioengineering techniques were tested. The river flow from an existing outlet drain was diverted to the test bed to simulate flows during dry weather and heavy rain. It was decided that existing concrete outlet drain would be later replaced by such river bed at the completion of the project. After 6 month monitoring period, the design for naturalization of the canal was finalized from the data collected. 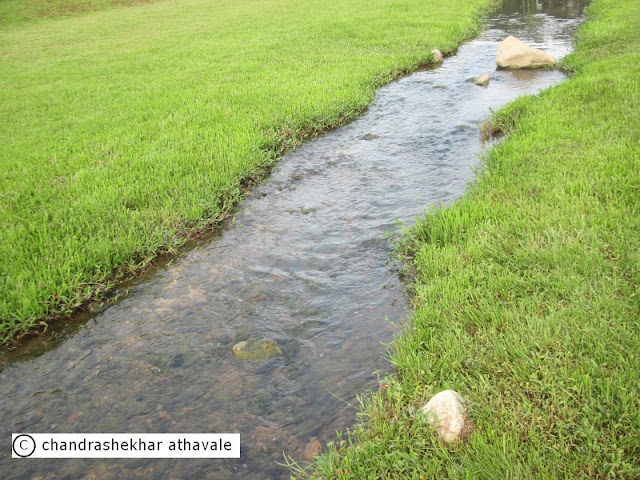 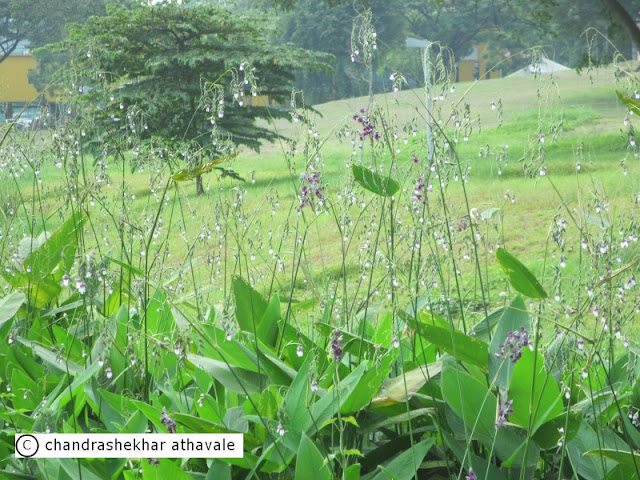 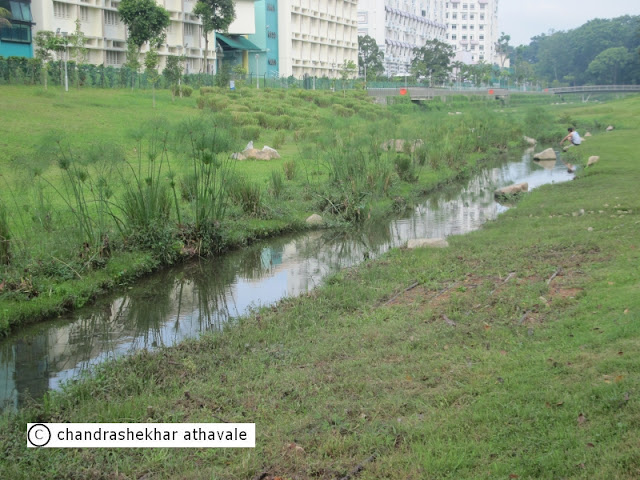 The Bishan park with naturalized Kallang river as an integral part of it, was recently opened to public and I had the pleasure of visiting it recently. Since, I had seen the old concrete canal, the change in the park area was absolutely stunning and a great pleasure to the eye. Gone were the old concrete channels with their darkened mossy slopes and barriers. A beautiful natural spring has taken its place with beautiful rolling meadows and grasslands. I could walk right up to the river bed and dip my toes into the running water. The river bed had many of these small islands where grasses are grown and full of wild flowers. I saw many small kids trying to catch butterflies with their nets. It was obvious that natural Eco-system of the river was revived and doing well.
After seeing the naturalized Kallang river bed, the first thing that came to my mind were the beautiful springs or Nala's, near Vetal hills slopes adjoining Prabhat Road area in Pune, India, which looked so similar to this river area during rainy seasons and where I had pleasure to play around, in my childhood days about 60 years ago. Even the bigger Mutha and Mula rivers looked almost same during summer months, if one moved slightly upstream say to Vitthalwadi or Hingne areas.
All these Nala's or springs are gone now either erased or made underground. Plans are on to create concrete channels for even bigger rivers to flow. We are now trying to invent what others in this world are trying to discard. The problem is even worst in Baner area of Pune, which has two rivulets known as Ramnadi and Devnadi. Both these rivers are similar to Kallang river with a similar short length and low water during summer. Kallang river model would be an ideal one for both these rivers. 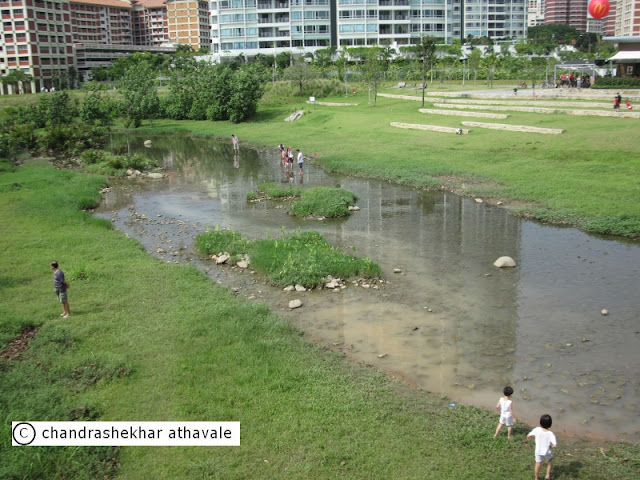 Returning to Bishan park area again, I tried to study the river bed and particularly the slopes. I could still see bio degradable jute netting laid across to retain the soil on the banks during floods. It is expected that as grasses grow on the banks the soil would stay firmly even during floods when the netting would biodegrade. 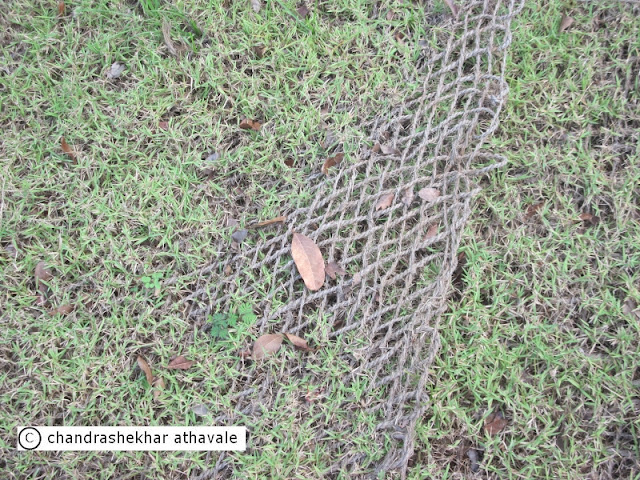 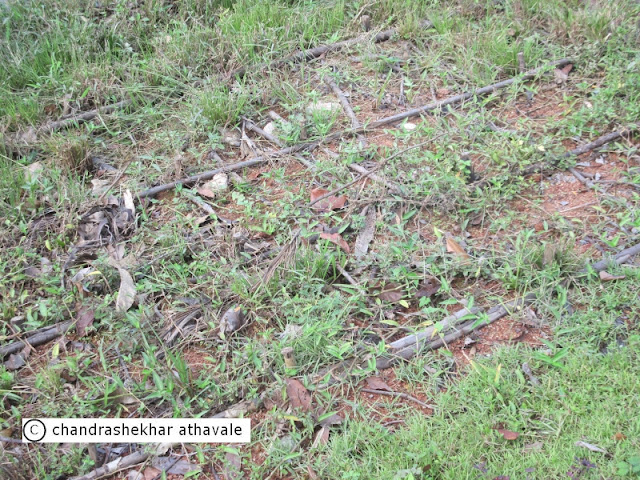 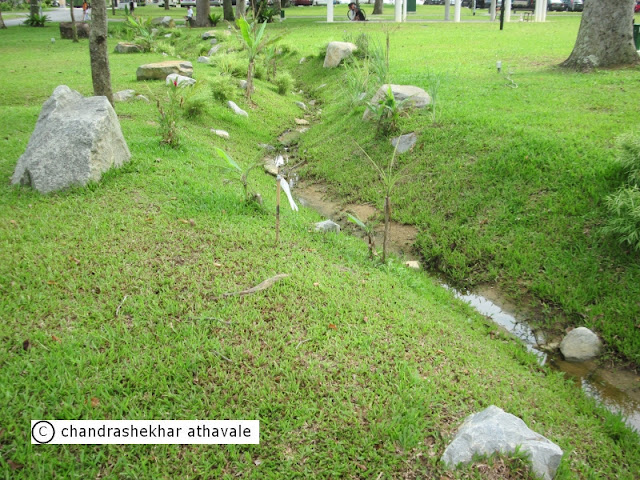 Restored spring flowing through park
One question arose in my mind. When a river is placed in a park how do we protect the people on the banks if there is sudden flooding. Then I saw the elaborate safety mechanisms in place. A river monitoring and warning system with water level sensors, warning lights, sirens and audio announcements that provides early warning when heavy rain or rising water levels are expected. Is in place. I also saw Warning signs, red markers and life buoys at many places along the river. This river monitoring system will trigger warning lights, as well as the siren and audio announcements at safety nodal points, to alert park users. 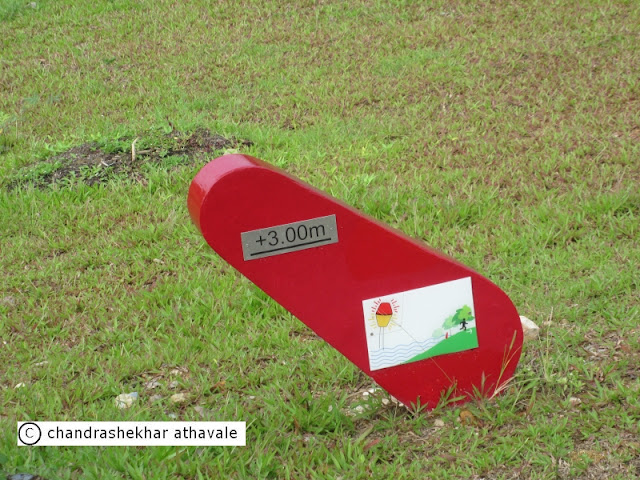 Flood control and warning system installed in river bed
A small mound or hillock has been created on a side of the restored river, made entirely from the blasted concrete slabs of the original canal bed and walls. Eventually, when the mound is covered with grass and shrubs, it is bound to add to the beauty of the landscape. A decorative sculpture has been installed at the top of this hillock. 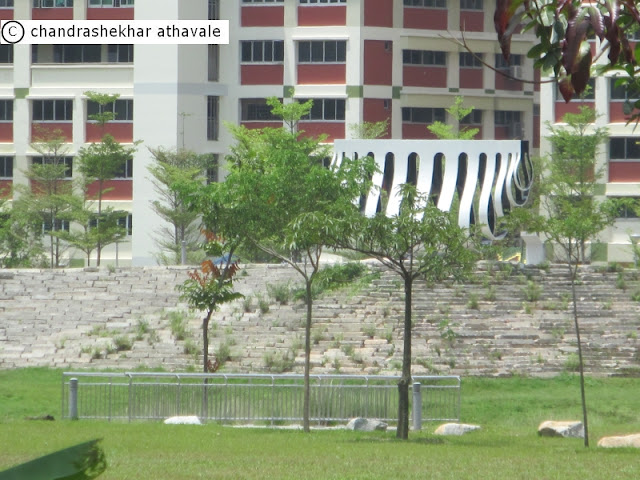 Hillock created from concrete slabs
As I returned home after spending few hours in this beautiful park area with nice recreational facilities, I was quite happy with my experience. But at the same time I was also feeling sad , as I also remembered how Nala's and rivulets in my home town Pune city, have been murdered and destroyed under disguise of development. But we all can be at least hopeful that there is a possibility and scope for reviving Pune's once beautiful rivers and rivulets. I sincerely think that we should follow and replicate the Kallang river experiment and improve upon it for our own use. It seems there is still hope for Pune.
27 march 2012
at 8:51 AM