At home in Pune, India, I have a broadband connection with a wireless router for my internet connections. One problem with my set up is that some rooms in the house, which are farther away from the router room, do not get a proper wireless signal from the router. In one of the bedrooms, I have provided an Ethernet or a LAN cable, which could be connected to a computer. The problem is that once you are used to the convenience of the WIFI, a LAN cable, appears extremely cumbersome. Besides that, even though I do not posses one, younger members of my family are completely addicted to smart-phones and tablets. I have been hearing for some time now, muted complaints about the shocking calamity of loss of WIFI signal in certain rooms of the house.
I decided finally to do something about this grave deficiency in my house. Last month, there was a huge and heavily crowded exhibition of electronic products in Singapore . I paid a visit there, to find about a possible solution for my problem. After spending couple of hours amongst bustling Singapore crowds, I found out that what I needed was a wireless range extender. In the exhibition, there were so many choices and so little time that chances of making a wrong selection were quite high. I therefore decided to find out later, the best product that would suit me. Inquiries with nearby dealers and super malls later confused me thoroughly and I really did not know exactly the product I should get In the end, I decided to visit the basic source place for all electronic goods in Singapore, and that is how finally I found myself in Sim Lim square. 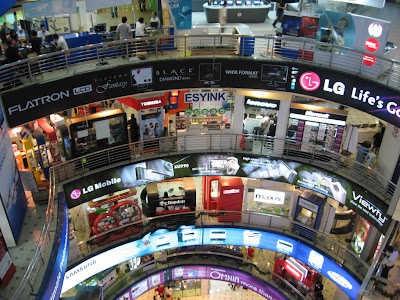 Sim Lim square is a 5 storied super mall with a plethora of small and tiny shops lined along all the four sides of a square in the middle, with further rows of more even smaller shops, behind the rows of shops in the middle. For a new comer, its a maze. And as in any labyrinth, what you need is untiring patience and perseverance to reach your goal.
One thing I noticed, as I entered the automatically sliding glass doors of Sim Lim square, was that I was on a very familiar turf. This did not mean that I had spent hours and hours of my past time here. In fact, I might have had visited this place only couple of times previously. Still that feeling of familiarity gripped me as soon as I entered this place. This was so , because even though this place was worlds away in appearance from my once familiar Lamington road electronic market in Mumbai, it still bore that familiar mark of a busy trade hub. 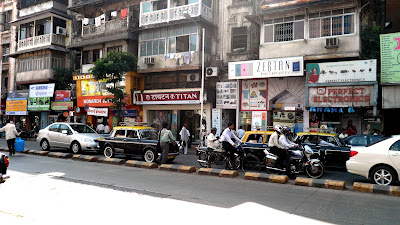 Having spent major part of my professional life in Electronic manufacturing business. Mumbai's Lamington Road market was something, which I could never avoid. We used to do almost all of our major purchases from this street. Lamington road is a busy thoroughfare in central Mumbai. Some major electronic components and goods shops line this street. However the real wholesale traders have offices, in countless number of small by-lanes in old buildings, almost all in a dilapidated state by now. Here a man would be selling a particular brand component by thousands or by hundred thousands to all other dealers in Mumbai or even across the country. If you can locate this person, your purchase cost for that component could go down by almost half. But the main problem here was of locating this man, because in such trade hubs, no one tells you anything. With hundreds of dealers selling the same component from so many shops, their livelihood depends upon keeping the whereabouts of the source in dark. If in any other shop, a customer makes an inquiry, a phone call would be made to an unknown source and discreet inquiries made. A price would be quoted to the customer after adding a profit. The telephone calls and the talk amongst dealers are carried in a sub dialect of Sindhi or Gujarati language spoken in parts of India. Any person who knows these languages, can make a fast buck here, just by listening to the talk on phone. 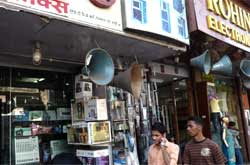 Only way of locating such wholesale trade sources is to find them by actually wandering in the dirty by-lanes with the dilapidated buildings yourself and making countless inquiries. In most cases, your inquiries would lead to nowhere. Yet sometimes, all of a sudden, you may be led to a correct wholesale seller, who can generate great savings in your purchase costs for future. This is the way trade hubs operate all over the world and Sim Lim square was no different. I knew in an instant that I had a hard task ahead. For next two hours I went round the shops, asking for number of products and slowly by process of elimination, zeroed on the correct product. Once that was done, just few inquiries led me to the shop who was selling that stuff at the lowest price.
As I left the Sim Lim square, may be an hour later, I was quite satisfied to know that I have saved few Dollars and have managed to buy what I wanted. But later, on reflection, I realized that greater part of my satisfaction came not because I saved a few Dollars. I was feeling happy because my mind had gone back to my Lamington Road purchase forays, as I looked for a product in Sim Lim square, Singapore. I was actually re-living my past for greater part of those couple of hours and that had made me really happy.
22 March 2012