Leading the people out 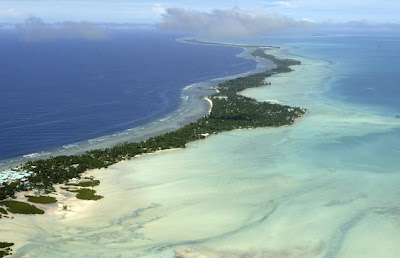 Book of exodus, one of the stories from the Bible, narrates how Moses lead the Jewish or Israelite people out of Egypt to avoid their almost certain death at the hands of Egypt's Pharaoh. I was very much reminded of this story, when I read about Kiribati President Anote Tong's proposed action, to move his people out of Kiribati. I am sure that many of the readers are bound to ask, Where the hell is Kiribati?. Frankly, I had also never heard of this place till I read this news. 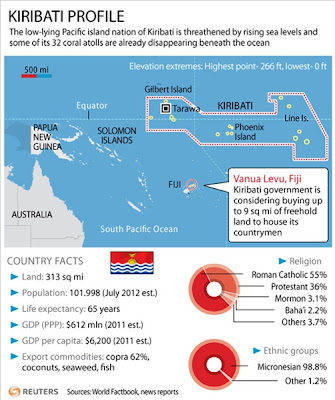 Kiribati is a small Pacific archipelago east of Papua New Guinea, located exactly on the equator and near the international date line. There are three major groups of islands here, known as Kiribati (Gilbert), Rawakj (Phoenix) and Kirtimati (Christmas) islands. The Capital of Kiribati is Tarawa , which is not a single town but a group of islets surrounded by a coral atoll, and apart from the south where causeways link the islets, one needs a boat to navigate around the main features of the islets. Kirtimati Island , is the largest atoll in the Pacific Ocean. The atoll covers 606 sq km (234 sq mi), of which 243 sq km (94 sq mi) are land.. The majority of the island's inhabitants work on coconut plantations and in copra production. The island's also has a major airbase on the northeast side of the island. Since international date line passes through middle of the archipelago, east side islands used to be a day ahead of the the islands on the west side. A funny situation, which was later rectified by the Kiribati Government by having a standard time throughout the archipelago. 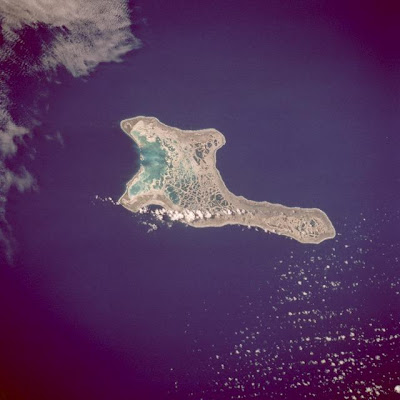 The Kirtimati island was discovered by Captain James Cook in 1777 and was declared a British colony. In spite of its being a remote place, historically speaking, few events of international importance have taken place here. In 1943 a major battle known as battle of Tarawa, was fought here during a major marine assault. These islands were also used for nuclear tests by Britain in 1957 and 1958 and by US in 1962. The nation became independent in 1979. Kiribati's entire population is just 103000 people, nearly half of which stays on the atoll of Tarawa, which has a livable land area of just 2000 acres. Like much of the Pacific, Kiribati is poor; its annual GDP per person being just $1,600. However, country is allowing phosphate mining on the archipelago since 1970. This has generated substantial foreign exchange reserves for the nation.
All this sounds fine. Then why President Anote Tong wants to move his people? The villain here is the bane of many pacific islands or the looming danger of Climate change. The whole world is in danger of being affected by the climate changes. However places at sea level are the ones most likely to be affected and are naturally concerned about climate changes. The rising water level in the oceans is threatening these regions and the residents fear that their land will submerge in water with the passage of time. Small islands at sea level are the most vulnerable places that face the threat of getting disappeared. According to one estimate, the current level of sea rise in the Pacific is at about 2 millimeters (0.1 inches) per year. However, many scientists expect that rate to accelerate due to climate change. 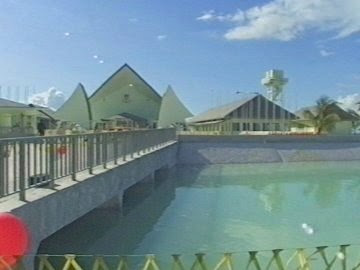 In Kiribati, many of it's atolls rise just few feet above sea level and are facing an imminent danger of getting submerged. As oceans warm, the ice is expected to melt faster. Kiribati's president Tong says that some villages have already moved and there have been increasing instances of sea water contaminating the island's underground fresh water, which remains vital for trees and crops. He says that changing rainfall, tidal and storm patterns also pose as much threat as ocean levels, which so far have risen only slightly. Seeing the writing on the wall, Kiribati leaders have thought of many novel solutions to the problems, which include shoring up some Kiribati islands with sea walls and even building a floating island. However the latter option is likely to prove too expensive and reinforcing some islands will only ensure that Kiribati continues to exist in some form or other even in a worst-case scenario. 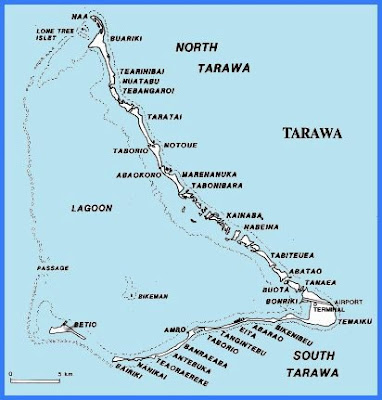 The islands of Fiji are located about 1400 KM south of Kiribati and are a home for 850000 people. A church group on Fiji's main island Viti Levu, is offering for sale about 6000 acres of fertile land for a price of $ 9.6 Million. Kiribati president's cabinet has endorsed last week the purchase of this land as an insurance policy for the people of Kiribati. President Tong feels this land would be enough for Kiribati's present population of 103000 people. He says that probably for his generation, moving to Fiji may not be necessary, but for future generations of Kiribati, moving may not be a choice but necessary for survival.
Government in Fiji says that several Government agencies are studying Kiribati's proposals and their likely impact on the population of Fiji. Fiji cabinet is expected to take a decision on the matter soon and would announce whether Kiribati can buy the church land or not. Whatever is the Fiji Government decision, Kiribati leader's bold thinking and efforts to save future of his people are well worth appreciating.
13 March 2012
at 10:46 AM