Three major rivers originate from glaciers and great frozen lakes at a height of about 18000 feet in western Tibet, all in the vicinity of the revered 'Kailash' spur. The first major river of this trio is the Indus, which flows towards Northwest. The second river, which flows southwards and is of great importance for north India, is the Satlaj river. The third river flowing eastwards is known in Tibet as Yarlung Tsangpo or Brahmaputra in India. The total course of this river actually extends to more than 1800 miles. Initially this river flows eastwards on the Tibetan plateau at an average gradient of only about 15 feet per mile.

When course of this river reaches the Arunachal Pradesh state border with Tibet, Yarlung Tsangpo suddenly makes a full left turn and starts flowing northwards in a region which is considered as easternmost end of the Great Himalayan range. Yarlung Tsangpo flows here in a deep canyon or gorge between two Himalayan peaks 'Namcha Barwa' and 'Gyala Peri'. This canyon, only about 13 miles wide, is as deep as 3 miles at few places and is therefore sometimes called as the mount Everest of the gorges. Yarlung Tsangpo waters crash down over 15000 feet in this gorge. After this great fall, the river makes full, about turn to south and rushes towards Arunachal Pradesh state boundary. This region, where the river takes such a big turn of almost 270 degrees, is known as 'The Great Bend' of the Yarlung Tsangpo.

Tibetans had always considered this great bend region as a most revered heavenly abode of Gods. They believe that the course of river, if seen from above has a shape of a Lion's mouth and this Lion has protected them over ages.

Guru Padmasambhava
Ancient Tibetan Neyigs or guides to sacred places, in form of scrolls, describe the journey of Guru Padmasambhava to those places 1200 years back. Unfortunately, many such Neyigs were destroyed by Chinese in cultural revolution. Tibetans also believed that the Yarlung Tsangpo has a great fall in this place. Tibetan texts describe a Beyul or a paradise behind this fall, which one can approach through a secret door.
In the Lion's mouth tract, the river goes down at an unbelievable slope of 50 to 200 feet per mile creating a tremendous force with which the water flows down. The both banks of the river here are very steep and covered with dense forests almost impregnable. This geographical fact and the Tibetan belief gave rise to an assumption amongst western geographers that Yarlung Tsangpo has a great fall here in the great bend area which can be compared with Victoria falls or even Niagara. However, since the canyon was almost impossible to penetrate, no exploratory expeditions could succeed. Nineteenth century British explorers like Kinthup, Captain Bailey, Kingdon Ward and Lord Cawder did manage to explore the gorge and write down details of the terrain except for a 5 mile patch, which remained unexplored.
China opened up access to this region for explorers only in 1990 and a number of expeditions were carried out there without much success. Ian Baker, a Buddhist Scholar and also a real life mountaineer and explorer made three exploratory attempts in great bend area and around in April 1993, July 1995 and October 1998 as a part of three major expeditions. During the last expedition, he was able to reach the last 5 mile patch that still remained unexplored. They found no great fall but series of mind boggling smaller falls. 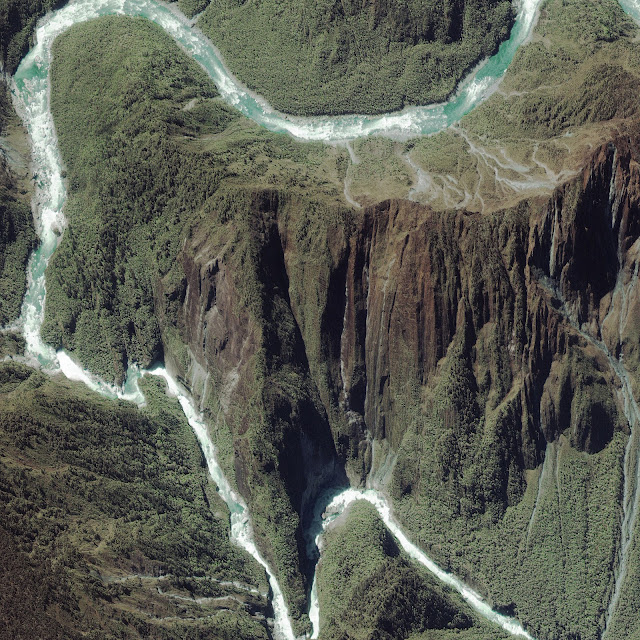 5 mile region
In 1998, Ian baker's team left for the final pilgrimage to the hidden gorge of the Brahmaputra just before the Great bend. Starting from Trulung village near Po Tsangpo river, they travelled to the hidden 5 mile gorge, via Yumi, Tsachu, Bayu, Azadem, and Tsodem to reach the Rainbow falls first discovered by Kingdon Ward. Continuing further along the mountain ridge and descending towards river at several points, the team finally succeeded to locate the hidden fall of Brahmaputra, described by the Guru Padmasambava 1200 years back and which has eluded almost everyone else. They even managed to locate an oval opening in the wall next to the falls, which is anyway impossible to approach because of the steep shear edges along the gorge.

Another view of fall
It is impossible for ordinary people like us to ever visit the great bend region. The Google Earth however compensates for this disability with wonderful shots of this region, which we can easily enjoy. These shots give us a good idea about inaccessibility of this region.

Northern part of Great Bend
The great bend region has come into limelight because of another recent international dispute. News started coming from China few years back, that Chinese Government has taken up a major plan to divert waters of Yarlung Tsangpo, after great bend area and before river riches Arunachal Pradesh state. Eventually, Chinese have denied having undertaken any such project. However, alarm bells continue to ring for lower riparian countries like India and Bangladesh over the matter.
at 9:30 AM