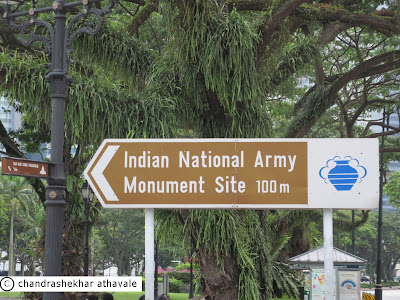 Subhash Chandra Bose, perhaps the most charismatic leader of India, was one of the leaders, who lead India during freedom struggle against the British. He had paid a brief visit to Singapore in July 1945 to lay the foundation stone of an unusual monument. This monument was to be a memorial dedicated to the unknown soldier of the Indian National Army, fighting the British in the jungles of Manipur, Assam and Burma. 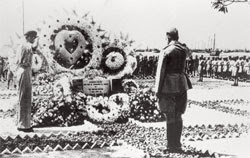 Subhash Chandra Bose at foundation laying ceremony of the monument
While paying homage to the martyrs of the INA, Subhash Chandra Bose had said, “The future generations of Indians who will be born, not as slaves but as free men, because of your colossal sacrifice, will bless your names and proudly proclaim to the world that you, their forbears, fought and suffered reverses in the battle of Manipur, Assam and Burma. But through temporary failure you paved the way to ultimate success and glory.” 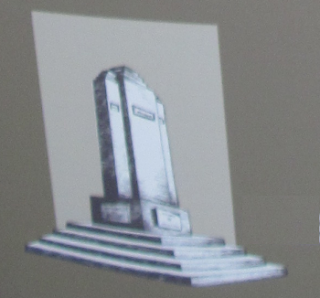 A sketch of the original memorial built in 1945
The idea of 'Indian National Army' was first mooted by an Indian Prisoner of war, Captain Mohan Singh, in 1942 with the aim of mobilizing Indians in Singapore to support India's independence struggle. The Japanese thought it to be a good idea as it would have enabled them to exploit the anti British sentiments of the Indian community in Singapore in their favour. Japanese started openly courting the Indian community with broadcast messages that Japanese invasion of Singapore was actually an act of liberation. However distrust developed soon between Indian community in Singapore and the Japanese and the movement was disbanded in 1943.
Subhash Chandra Bose however saw the importance of this movement and sought active cooperation of the Japanese, who also believed in the movement's potential to satisfy Japanese goals, and agreed. Subhash Chandra Bose was, though a eminent leader and a former president of the Indian national congress, a born revolutionary and with his fiery speeches, managed to get a large support for the Indian national Army. The army after training, started their advance towards India from Burma and had even reached Imphal town on Indian soil. They were however beaten back by the British soldiers afterwords. The INA later collapsed and Subhash Chandra Bose disappeared from the political scene mysteriously. The Singapore memorial was built before the collapse, in memory of the soldiers, who had died in fighting in northeast India. The monument was completed in a short span of days and had following Urdu words inscribed upon it, which were the motto of the INA: Unity (Etihaad), Faith (Etmad) and Sacrifice (Kurbani). 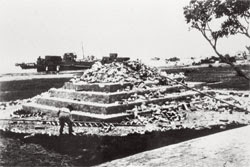 The destroyed memorial after British reoccupation of Singapore
However, when British took back Singapore within two months of the completion of the memorial and Japanese surrendered to the British forces on 15 august 1945. After British takeover of Singapore, Lord Mountbatten, Head of Southeast Asia Command, ordered the INA Memorial to be destroyed., 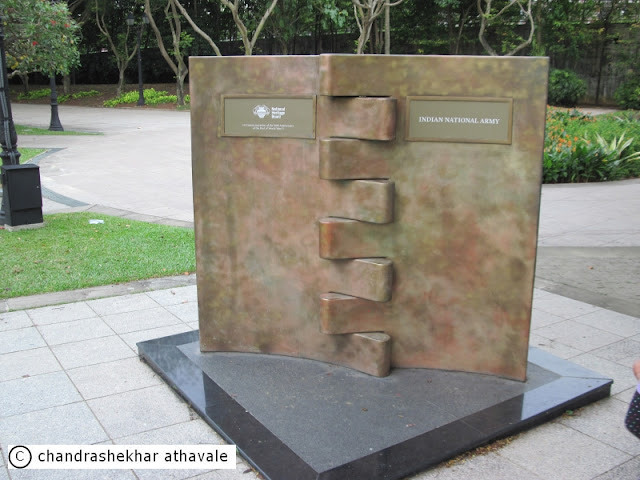 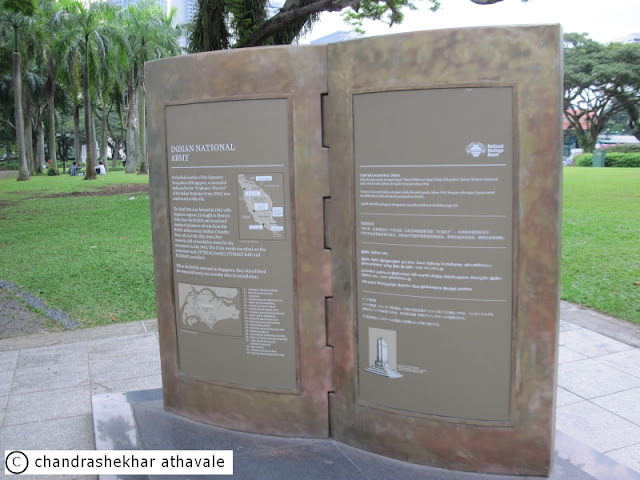 Both faces of the heritage marker built by Singapore Government in 1995
Singapore Government, realizing the heritage importance of this INA memorial, have erected in 1995, a solemn and befitting commemorative plaque, at the site of the INA memorial located in the Esplanade Park, Singapore. This plaque stands at a very short distance from the British war memorial, which also honours the Indian soldiers, who died fighting on the British side along with the British soldiers. 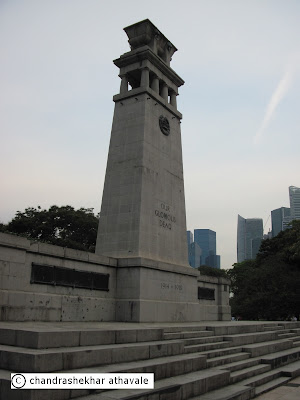 British war memorial in Esplanade Park
This commemorative plaque describes history of INA on one side and has words 'Indian National Army' written boldly on the other side. Recently there were some objections from some persons regarding having this INA plaque in Esplanade park.. Singapore National heritage board has since clarified that
“ It is not a 'memorial' dedicated to the INA but a World War II marker erected by the National Heritage Board (NHB) in 1995 in commemoration of the 50th anniversary of the end of the war. It is thus a historical marker denoting the site of the original INA memorial demolished by the British in 1945 on their return to Singapore, two months after it was erected. Although several million Indian troops fought World War II as part of the Allied forces, there was a small number in the form of the INA who saw it, at that point in time, as their mission to free India from colonial rule. The INA marker is one of 14 World War II markers that attempt to be brief but vital points of reference for Singaporeans, providing a holistic picture of the war and its impact on Singapore. Coupled with the NHB's other heritage trails and markers installed around the island, Singaporeans, especially the younger generations, can discover more about our nation's shared history and heritage.” 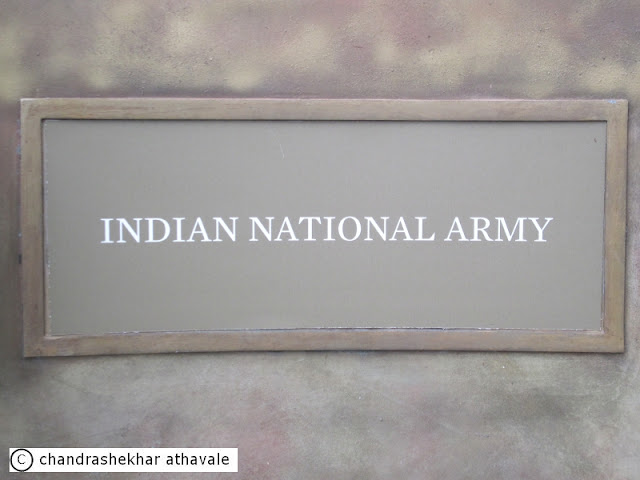 Whatever may be the clarifications of the NHB, for thousands of Indian visitors to this monument like me, the memorial nevertheless reminds us of the great contributions made by Subhash Chandra Bose and his Indian national Army towards Indian freedom struggle.
21 February 2012
at 7:28 AM