No Milk Please, we drink wine only! 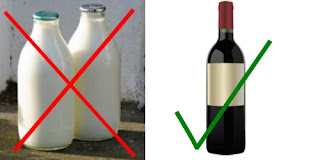 Mr. Baburao Patel was a remarkable personality from the pre-independence India, who made a mark on the society with his thinking and life. Baburao was born in Konkan on the west coast of India. However, it remains a kind of mystery, why he adopted a Gujarati surname like Patel later in his life. This man, in cricket term, was an all rounder. He got elected to India's parliament on Jansangh (Predecessor to present BJP) ticket from Khandwa in Madhya Pradesh. He was the publisher and editor of two magazines being published regularly. One was named as FilmIndia and dealt with Bollywood films and actor,actresses. The other magazine was named as Mother India and used to have a wide acceptance. I remember having read in this magazine about the questions Baburao had asked in the Parliament and the answers he obtained from the Government. Baburao was trained in Homeopathy and used to manufacture Homeopathic medicines under a brand name, 'Mother India Products'. Some of his medicines, which are still available, were quite effective for specific ailments. He used to manufacture a home treatment box consisting of 14 different medicines numbered from 1 to 14 with ready manual about treatment. This box is still available and is quite popular in Maharashtra. A lady Doctor I know, treats her kids for minor ailments using these medicines.
I am reminded of Baburao Patel today, for a pet theory of his. He used to call Sugar, Milk and Maida flour as three white poisons and always advocated that all grown up persons should give up these poisons.

It now appears that Sirsa district from Indian state of Haryana has decided to take up Baburao's advice, if not fully, at least one third part of it. The average daily sale of milk in this state is about 1.5 Million Rupees. But the sale of liquors and wine has now crossed 7.0 Million Rupees per day. During my young age, there used to be a wide spread shortage of milk all over India, in particular all the big cities. To get half a liter of milk from a Government run dairy, most of the people had to stand long queues early in the morning in front of Milk booths. Sirsa people, since they have discarded milk now, have started standing in front of liquor and wine shops in long queues.

Milk sellers federation says that members of the federation supply approximately 46,000 litres of milk every day in the city, whereas Dairy Association says that 35 small milk diaries, situated in the city only have a cumulative sales of 5,000 litres of milk daily. This way, total sale of milk doesn't cross Rs1.5 Million, daily in the city. There is another milk plant in the city named as Vita Milk. It  produces about 3,500 litres of milk, of which only a small quantity is supplied in the city as the balance is sent to other cities for consumption or used for making skimmed milk. Sirsa city was earlier famous for its boiled creamy milk prepared by traditional confectioners and was very popular amongst the young people. Most of the confectioners no longer prepare this as there is no demand. Some have even closed their shops.
On the other hand, as per government records, there are 35 licensed liquor vendors scattered across the district. Out of which 14 shops sell  IMFL or Indian made foreign liquor and balance 20 sell country liquor.  Shops located in Industrial Area, Rania Bazar, Begu Road, Lalbati Chowk, JJ Colony road, auto market, Shiv Chowk, Barnala road and near bus stand  of Sirsa city, have broken their previous sales records this year. IMFL liquor shops sales are around Rs 44.5 lakh per day while sales of country made liquor shops are about Rs 30 lakh per day. In addition to this there are illegal shop who are doing equally whopping sale.
What a wonderful scenario this Sirsa district has? They have totally broken away with silly old traditions of drinking that white poisonous  stuff called Milk and have embarked on a spree to enjoy natures most healthy drink made from liquor. I am confident that Sirsa soon would have the healthiest people from whole of India. This is the real secret of Haryana state,  becoming one of the most progressive state of the country.
No Milk please, We drink only wine and liquor.
10 February 2012
at 7:25 AM