Some of the programmes, broadcast on the Discovery TV channel, are my all time favourites. One such programmes is called 'American Hot Rod'. This programme shows the restoration work on the old cars by a California car shop located in a place called La Habre and owned by one Boyd Coddington. The programmes usually revolves around Boyd, his team and a car being restored at that time. This programme, first shown in 2004-2005 is still shown and I make it a point to see it again and again. I have always admired the clients, who come to Boyd to get some old car restored and are ready to pay a huge price for it. I always thought that because these guys are from US, they are able to afford that kind of money spending. I never ever imagined that any person in his senses would this kind of car restoration at such a huge price in India. So, when I saw the photographs yesterday, of the 100th birth-day celebrations of a century old Roll-Royce car belonging to 6th Nizam of Hyderabad state, Mir Mahboob ali khan, recently restored, I could not believe my own eyes. I am forced to change my view now, that such enthusiastic car restorers are also there in India. 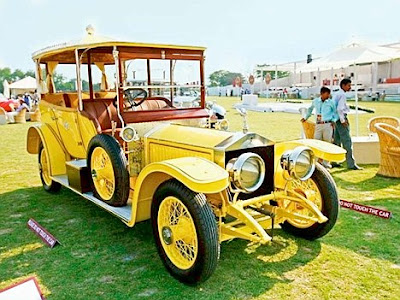 The restoration of the 'Silver Ghost Throne' Rolls Royce has been done by Princess Esra Jah, ex-wife of Prince Mukarram Jah of Hyderabad. She has spent Rs. 50,00,000 on the restoration. Many people think that this car is a symbol of the royal heritage as well as pride and culture of Hyderabad state. The car therefore has been placed on the bandstand in the compound of Chomahalla Palace after enclosing it in a half inch thick toughened glass box. 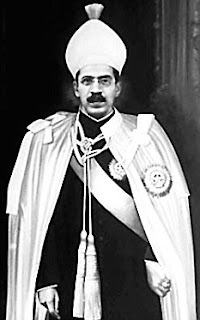 Mir Usman Ali
6th Nizam Mir Mahboob had passed away by the time delivery of this car was made. The 7th Nizam, Mir Usman, Ali khan received this car as apresent from his departed father. This car bearing chasis number 2117, has a 40 horse poser engine and run around 8 miles per gallon. Mir Usman ali used it only for ceremonial purposes and the responsibility of maintaining it was given to Hyderabad state railway. 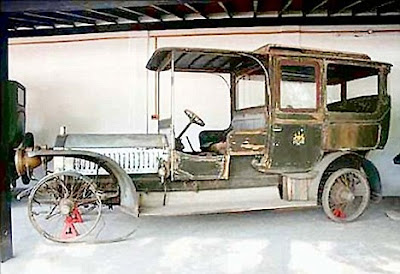 The car before restoration
After death of Usman Ali, the car was lying in Chiran Fort Palace. 3 years back, Princess Esra decided to restore the car and gave the work to Rana Manavendrasingh Barwani of Indore. From the quality of his workmanship,we can certainly call Rana Manavendrasingh as Boyd Coddington of India.
100the birth-day of this car was celebrated with great pomp and show in the Chomahalla palace. Chief chef of Sri Sakti College of Hotel management, Mr. Annadurai had made a special cake in the form of a replica of this car. Using normal sponge cake, sugar paste,royal icing, whipped cream, pineapple and berries, he laboured for 72 hours to bake this cake. Princess Esra and her step son. Prince Azamet Jah, cut the cake to celebrate the birth-day of the car. Mir Usman Ali was an accomplished Urdu Gazal writer. A musical programme also was arranged at the venue of celebrations. 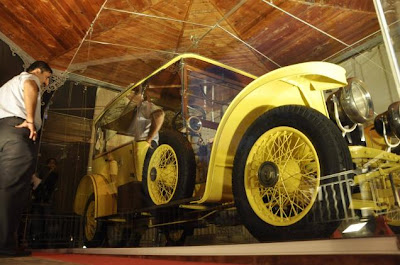 Princess Isra has now planned to restore many cars for Nizam's collection of cars. Next year french fashion house Cartier is arranging a travel concourse in Mumbai. Princess Isra plans to have tow Napier cars, owned by Nizam , restored for this meet.
I am sure to be reminded of Princess Esra and Rana Manavendrasingh, if I can see ever again the programme 'American Hot Rod' on Boyd Coddington's car shop.
8th February 2012
at 7:23 AM