The Magnificent Palace of the Peshawa's -The Shaniwar Wada – Part III

(This is an excerpt from a book written by Rao Bahadur D,B, Parasnis and published in 1921. I found detailed description of the Shaniwar Wada of the Peshawa's in this book extremely absorbing and thought of sharing it with the readers of my blog. The description is rather lengthy. I would therefore cover it in three parts. I request all my readers to read this and enjoy the magnificence of the Peshawa's and their palace.)

The first among the visitors was Major Price who visited Poona in 1791. He commanded a grenadier ompany in Captain Little's battalion and with it joined the Maratha army under the Brahmin General, Parashuram Bhow. He was present in the battle of Dharwar against Tipu Sultan in 1791, where he was severely wounded. On the surrender of Dharwar he proceeded to Poona where he remained attached to the military guard, or honorary escort, of Sir Charles Malet, first British Resident at the Peshwa's Court, until the Peace of Seringapatam. He visited the Peshwa's Palace on several occasions in company with Sir Charles Malet. He describes his visit on the 7th April 1791 in the following terms: 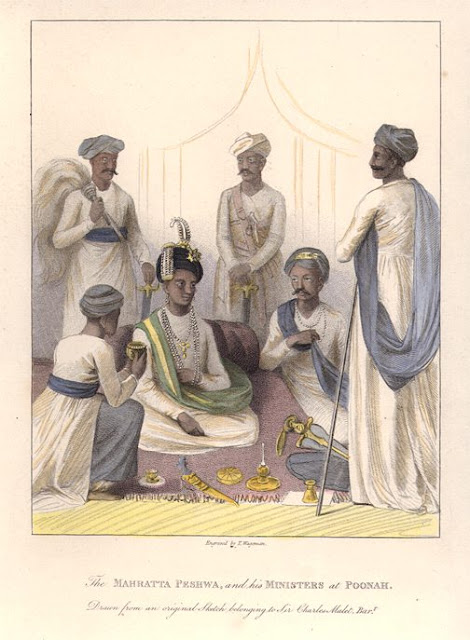 Sawai Madhavarao Peshawa
—
" The Resident, attended by the whole of his suite, European and native,and preceded by the escort of sepoys—about 80 in number —crossed the ford of the Moota; and proceeding through the middle of the crowded city, we came to the entrance of the Palace, which looks to the east*. This leading through a lofty gateway we passed to the left, along a very ordinary colonnade, which appeared, indeed, as yet in an unfinished state ; and at the termination of this, a sharp turn to the right, brought us at once into the Dewankhanah or hall of audience. This was spacious and lofty, but perfectly simple, and without ornament, unless we except the usual carving in the woodwork. The side towards the area—which
as far as I recollect was to the north—was entirely open, the roof being sustained by wooden pillars ; and the floor was covered, from end to end, with a spotless piece of white calico. The young Prince was seated on his regal cushion—or gaddy, his Minister, the veteran and intelligent Nana Furnoveis. on his right hand, and other functionaries, and military chiefs, forming a semi-circle at the head, and one side, of the saloon. "As we were, in conformity with prior arrangements, all in satin shoes and silk stockings,
we advanced without interruption, being, of course, announced by numerous choubdaurs, or silver sticks, towards the Prince, who stood up to receive us ; and having treated each of us, without exception, with the buggulguiry, or accolade—which was also done by the Minister—we all of us then seated ourselves, as best we could, upon our hams—as much as possible concealing the soles of our shoes, which it would have been considered the extreme of indecorum to discover. ' The Resident, communicated with the Peshwa, through the Minister, in a manner which appeared most cordial and unreserved. And I cannot forget the splendid display of jewels which decorated the person of the
young Prince ; but more particularly a superb necklace, descending far down the breast, and consisting of alternate diamonds and emeralds each fully as large as a nut-meg ; which must have been of inestimable value."

Another distinguished visitor Lord Valentia, who paid a visit to Poona in 1803, has left an interesting account of it in his travels. About the Palace he writes : 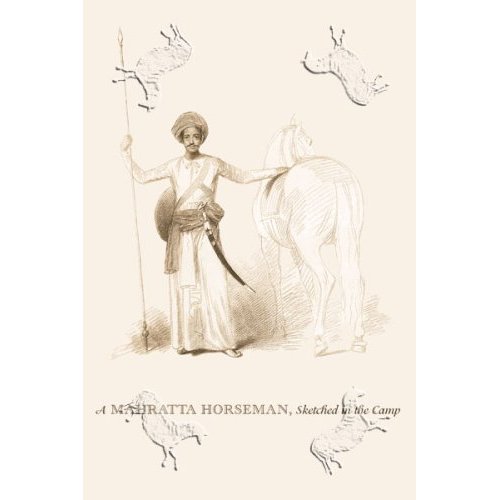 A Maratha soldier with his horse
—
" On entering the Palace, we found His Highness's cavalry and guard of infantry drawn out, with his elephants and suwarry ; they were by no means splendid. As we passed under the Nobit Khanah the kettle-drums beat. Within the walls the servants were all at their posts, and the crowd considerable. In the windows were numbers of the higher orders. We quitted our palanquins at the foot of the stairs, which we mounted, attended only by our Chobdars and Ausubadars. A small anti-room led to the durbar. At the door, I waited a few seconds, till I saw that the Dewan of the State, Sadaseeo Maunkesor, was sufficiently near ; when, having quitted my slippers, I stepped on the white cloth with which the whole room was covered, Colonel Close supporting my left arm. I embraced the Dewan, and presented the fficers of my suite. At this moment the Peshwa entered the room, and stepped on his guddi or throne.” " The Palace is a tolerable handsome building, and was very clean. The Durbar room is large ; it is supported by wooden pillars handsomely carved. His guddi was of white muslin, richly embroidered in gold and coloured silk. His attendants stood round without the pillars, except a few with silver sticks. Holkar did not much injure the Palace, but he carried away every thing moveable ; a small armoury and the elephant haudahs did not escape."

Sir James Mackintosh, Recorder of the Bombay Court, paid a visit to the Peshwa in 1805. He describes the Palace in his journal as follows : 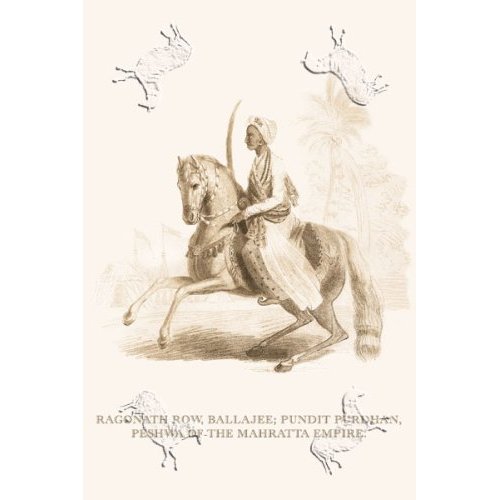 Raghunathrao Peshawa
—
" We went about half a mile, or somewhat less, through the city, of which the principal streets are paved with flags, and which is reckoned one of the best-built native towns in India. The word Bhara (ivada?) which is the term for the Peshwa's house, ought not to be translated palace, because it is applied also to the houses of the other Mahratta Chiefs at Poona. From its size, it might well deserve the name ; the front is about the length of Somerset-house towards the Strand. We entered through a gate into a large square formed by the Bhara. The walls all around were painted with scenes of Hindu mythology. At one of the corners of this rather handsome square, we had a staircase to climb, which formed a singular contrast to the exterior of the building ; it was steeper than that which goes to the terrace at Parell, and not half so broad. At the top of this staircase was the entry of the hall of audience, where I left the splendidly embroidered slippers with which Colonel Close had furnished me. The hall was a long gallery, about the length perhaps of the verandah at Parell, but somewhat wider, supported by two rows of handsome wooden pillars, either of oak or of some timber exactly resembling it. (The width of which I speak is between the pillars.) Behind the pillars, on each side was a recess about half the breadth of the middle part. This apartment was carpeted, and near the end at which we entered was a white cloth laid, with three pillows : this was the Musnud, or throne."

From the above description it appears that Bajirao did not receive his illustrious guest in the Ganpati Mahal but in another hall, which is difficult to distinguish from others at this distance of time. The fourth English gentleman to describe the Palace was Lt.-Col. Fitzclarence who visited Poona on the 31st January 1818, shortly after the battle of|Kirkee, when the Peshwa Bajirao had already left Poona and the Palace was occupied by the British and turned into a military hospital. He
writes :
—
' The old Palace is surrounded with a wall and circular bastions, having an open space in its front. The walls of an inner court are miserably daubed with the Hindoo mythology, elephants, and horsemen. His Highness made but little use of this abode except on public occasions, though it contained the temple or
room for the yearly fete in honour of his protecting deity Gunish. " I found Mr. Coates in a deep verandah in one of the small courts, crowded with trees and shrubs, and he was so good as to shew us round the Palace. The great quadrangle is more handsome than that at Nagpoor, has sculptured wood pillars and cornices, which are very splendid, and the whole Palace is glazed throughout. A very fine room, with dark coloured wooden pillars, and carpeted with red cloth stuffed with cotton, displayed a full length picture of the Marquis Wellesely, which had been found neglected in a small adjacent apartment ; and near the likeness of this great statesman was a miniature of Sir Barry Close, also found in the palace, let into the wall in the plaster. There were also two very large well-fashioned globes, with the names in the Latin language, and also the . . .of silver. These, it was supposed, had been a present from the King of England to a former Peshwa, previous to the year 1788. From the top of the Palace I had a most extensive view of the city, camp, mango groves, the ruins of the Sunguni, and holy hill of Parbutty, to the south-east of the city. Poona, not having any suburb like Nagpoor, is inferior in population, and covers less ground. We now proceeded to the holy chamber, dedicated to a deity who could boast of an elephant's head and trunk, and who, to complete the interest he excited, was painted blue. He was sitting cross-legged, but we did not find this sapient gentleman ready to receive us, for after rummaging about, he was discovered put by in a cupboard, to keep him from the dirt and flies. The room is vaulted, and about fifty feet along, and very high, with a gallery which runs round it, like our music galleries in ball-rooms. It is one mass of mirrors, intermixed with green foil, inlaid with gilt wooden partitions and numbers of English cut-glass chandeliers. The decorations were covered, to save them as well as their master. To the fete in the honour of this tutelary divinity, the Resident was always invited, and the Peshwa did not himself do the honours, as he was also a visitor to his long-nosed patron. I saw here an English clock which was found going well, in the palace ; several large English books ,fine engravings, and the remains of a very large orrery nearly destroyed. There was, besides, a native map, but I imagine Goklah must have a better one, to have so long escaped our pursuing army." 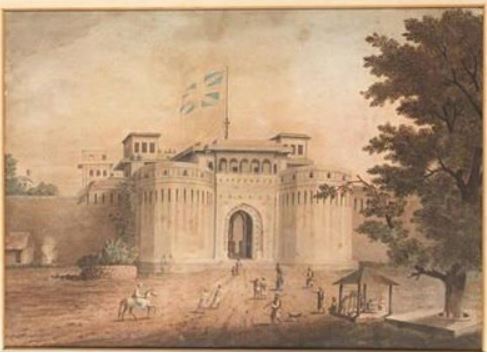 This was perhaps the last description of the Palace that had been written while the building existed intact, for, in June 1818, the Peshwa abdicated his Gadi or throne to Sir John Malcolm and went to reside at Bithur near Cawnpur as a political prisoner of the British Government. Exactly ten years after this event the whole Palace was completely burnt down by a great fire on the 27th February 1827, which lasted for seven days, and except the heavy rampart, strong
gateways and buried foundations and ruins that still bear witness to the rise and fall of a mighty Empire, nothing of this majestic and magnificent building has been saved from the cruel hand of Time. It is only the Nagarkhana or music gallery on the top of the Delhi gate which once sang loudly the glories of the great Peshwas, now seen mourning in silence.