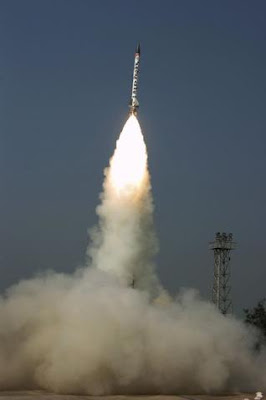 On the east coast of India  it was a clear morning on Friday, 10th of February. Just after 10.10 AM, the Long Range Tracking Radars near Puri city on Orissa coast, picked up a warning of a hostile missile, coming in to attack. The Missile was at an altitude of about 100 KM and was rapidly descending down. Multi Functional Radar at Paradip also started tracking the hostile missile and passed on the information to a guidance computer, which after computing the target's flight data, immediately issued a command to launch an Advanced Air Defence (AAD) interceptor missile from the Wheeler Island base on east coast of India. Within minutes, the interceptor missile was launched. The interceptor missile, equipped with inertial navigation system, an on board hi-tech computer and a radio-frequency seeker, locked on to the target hostile missile. Travelling at supersonic speed, the AAD homed on to the target and blasted it to smithereens, around 10.15AM. at a height of about 15-km in the endo-atmosphere.
This is neither a fragment of imagination from me, nor a scene from some action flic. The action scenario actually took place. Only the attacker missile was not from some foreign country, but a modified surface-to-surface Prithvi missile launched from Launch Complex-3 at Chandipur, again on east coast of India and was sent to validate the new Ballistic Missile Defence (BMD) capability for India. 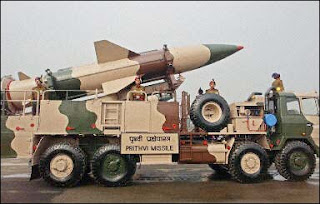 The launches, that of the attacker missile and of the interceptor took place independently and both missiles were controlled by Radars in different places in the country, one by the Mission Control center and another by Launch control center. Fifteen computers stationed at Hyderabad, Balasore, Chandipur, Konark, Puri, Wheeler Island and so on, worked in unison and saw that the mission was a complete success. Defense research and development organization engineers, saw the tracks formed by the fragments of the destroyed attacker missile on their radar screens. The attacker missile belonged to 600 km range class, the interceptor missile is capable of defending against on missiles which have a range up to 2,000 km.
DRDO's Chief Controller for missiles and strategic systems certifies that it was an excellent interception and says that “the entire interception was automated with radars tracking the incoming target missile.” While the Launch Control Centre was situated in the Wheeler Island, the Mission Control Centre was situated a few “thousands of kilometers away from the launch point” of the attacker missile.
Director General of DRDO now confirms that India’s Ballistic Missile Defence (BMD) programme in the endo-atmosphere (that is, below an altitude of 50 km) is now ready for deployment and the country is in a position to take it to the next phase of production and induction.. A user team from the Army, which was present in the Wheeler Island, watched the entire operation.
So far so good. We must congratulate the scientists and engineers of the DRDO for a sucessful missions. A nagging doubt however remains in my mind. We, Indians are good at creating new things. We build state of the art airports. Yet, after few years, we find that these are in a dire state, because of negligence and extremely poor maintenance. In a ballistic missile defense system, the defender missile has to be launched within minutes as the window available for defense can not exceed more that few minutes. This means that the defense system must be always maintained and kept in perfect condition so as to be ready for launch at any given instant. To build in, such high degree of readiness, is indeed a tall order and unless it can be achieved, just providing a Ballistic Missile Defense may not achieve much.
11th February 2012
at 9:37 AM