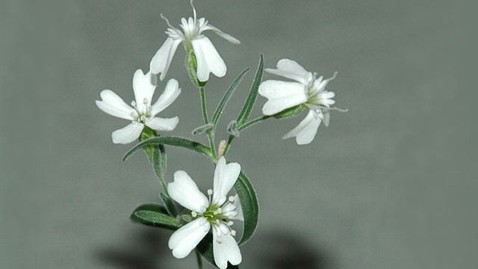 Many of us would remember the 1993 famous film by Steven Spielberg; Jurassic Park. In this film, dinosaurs were shown to be cloned from the DNA extracted from insects preserved in prehistoric amber. That might never happen in reality for the animal kingdom. Yet, Russian scientists have now revived a plant 32K years old, if not from Jurassic age, and shown that the idea is feasible at least for the plant kingdom.
A team of researchers from the Institute of Cell Biophysics, Russian Academy of Sciences research centre at Pushchino near Moscow, was carrying out research on ancient squirrel burrows, long hidden by layers of loose soil and snow but now standing exposed, because of their location on the banks of the lower Kolyma river on the tundra of northeastern Siberia. One of the member of this team, Stanislav Gubin,, who has spent years rummaging through this area for squirrel burrows, describes the discovery of 70 squirrel hibernation burrows that they found,
“The squirrels dug the frozen ground to build their burrows, which are about the size of a soccer ball, putting in hay first and then animal fur for a perfect storage chamber,” “It’s a natural cryobank.” 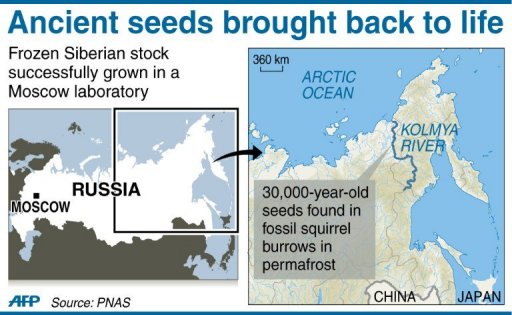 The burrows found by this team were sealed by windblown earth, soon after being dug by squirrels and were in the range of 20-40 meters (60-130 feet) below the present surface of earth in permanently frozen or permafrost conditions. The permafrost essentially acted as a giant deep freezer, and the burrows and their contents resided in this closed world -- undisturbed and unthawed, at an average of -7 degrees Celsius (19 Fahrenheit) -- for tens of thousands of years. The burrows were located in layers containing bones of large mammals such as mammoth, wooly rhinoceros, bison, horse, deer, and other representatives of fauna" from the Late Pleistocene Age.
Researchers found in these burrows, hundreds of thousands of seed samples from various plants. In this lot they also found fruits stored by ancient squirrel's and these were identified as those belonging to a flowering plant known as ' Narrow-leafed Campion' or in botanical terms known as ' Silene stenophylla ' plant. The fruits survived because the burrows were quickly covered with ice, and then remained "continuously frozen and never thawed," in effect, preventing any permafrost degradation.
A report now published by Svetlana Yashina and David Gilichinsky, who were leaders of this team , says that the researchers first tried to grow the plants in a pot in their lab near Moscow by using mature Silene Stenophylla seeds, but when that failed, they turned to the plant's placental tissue, the fruit structure to which seeds attach. The scientists extracted the so-called "placental tissue" from immature seeds and put it in a special nutrient solution, which imitated a growing plant, to successfully grow regenerated whole plants in pots under controlled light and temperature.
After a while, the tissue in petri dishes germinated into mature seeds, which were planted in soil and have grown into fully-blossoming plants. The scientists say that they found only subtle differences in the shape of petals and the sex of flowers, between the resurrected old plants and the present day Silene stenophylla plant, which still grows in the Siberian tundra. The plant now grown by Russian scientists , can be considered as world's oldest plant, as the claim is supported by firm radiocarbon date, which says that the fruits are 31800 years old.
However, in a tragic twist to the story, the team leader, David Gilichinsky died of heart attack just before the report was to be published.
23 February 2012
at 9:03 AM