Holiday in Goa- Part I

You can reach Goa from the north, in two possible ways. The first and the simplest, at least on the map, is to hit the Mumbai-Goa highway, which starts at Panvel, some 50 Km south of Mumbai. This road goes straight to Goa. There are no mountain passes or Ghats, as we call them here. Yet there is a catch. This road in most parts, is just a two lane road. Considering the volume of traffic on this road, and the trucks that ply on it, I think that it is best to avoid this road as far are possible. The other alternative is to take Mumbai-Pune expressway and then bypassing Pune city, take the National Highway No. 4 to Bengluru. This road is fairly wide (4 lanes) and in general one can have a pleasant journey. Since I started my journey from Pune, my choice was limited to latter, any way. 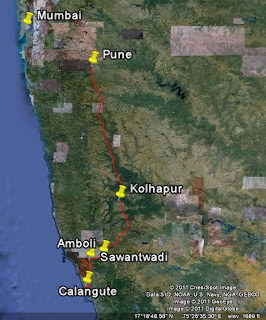 We had planned to leave Pune city early in the morning, have lunch at Kolhapur and then proceed to Goa. We managed to leave Pune, well in time, after having sumptuous breakfast of Idli's and other south Indian snacks, joined the Bengluru highway early morning. At a distance of 8 to 10 Km from the city, we had to cross the first mountain pass at Katraj. I had some apprehensions about this pass because of the heavy traffic, which I had experienced previously. I had somehow forgotten that it is no longer necessary to cross the Katraj pass as a new tunnel has been built. This tunnel, which removes the necessity of climbing a narrow mountain road , has made the travel much easier and before we knew it, we were already speeding towards Satara. Our  holidays to Goa had truly began. Kolhapur city is about 200 Km south of Pune and we managed to reach there in about three and half hours after breaking for a cup of tea at Karad.

According to me, Kolhapur city is famous for three things. The famous temple of Ambabai, the red coloured lamb curry and Ice cream. It was but natural to order some nice lamb curry and rice for our lunch. The curry which is prepared with plenty of chillies is a dish worth experiencing. After this hot stuff, we had some really good ice cream to cool us. And just as we were planning to leave, someone suggested that we should visit the Ambabai temple, since we are here. I knew that the visit to temple means a delay of at least one to two hours. Any way, since we had reached Kolhapur rather early, I agreed for the ordeal. The temple was crowded and hot as expected. We had to stand in a queue to get inside, but finally managed to do it and pay our respects to the goddess. 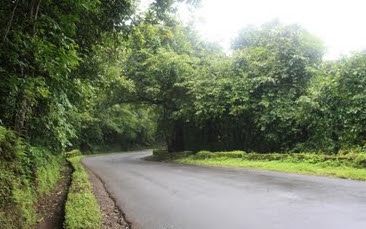 From Kolhapur, there are two ways again to cross the Western ghat mountain ranges and join the Mumbai-Goa road on the sea coast. First road goes through Gagan Bawada pass and the second through Amboli pass. We opted for the second choice because on Gagan Bawda route, a sugar factory has come up and there is heavy traffic. Comparatively, Amboli route is better. We branched off, few Kms after Nipani town, from the Bengluru highway, and immediately encountered a patch of a road in really very bad condition, which slowed town our speed almost to crawling. This few Km patch of the road is cought in an inter state dispute between states of Karnataka and Maharashtra and neither state wants to undertake the repairs. Things improved later as we again drove back into Maharashtra state, crossed Gadhinglaj town and reached beautiful Amboli town. This town located on top of the mountain pass is ever green, has some beautiful water falls and vista points. It was a pleasure to drive through Amboli pass and go down the Ghat.
We approached Mumbai-Goa highway near the town of Sawantwadi. Another neat and nice town famous for its wooden toys. From here there was no choice but to join the traffic on Goa road and move along. There was a sense of excitement as we had finally reached Goa, the place famous for its beaches, temples, fish curry and drinks. We crossed into Goa at Terekhol and continued along Bardez town and Mhapusa city. A road branches off west from national highway no. 17 (Mumbai-Goa Road) and is known as CHOGM road. We took this road and reached the town of Calangute. We had a reservation at a place here in Calngute, and after some efforts found the place.

Our hotel with its open courtyard type construction had a big swimming pool at the center with guest rooms built on three sides. We dumped our bags in our rooms, changed and rushed off to the nearest beach. 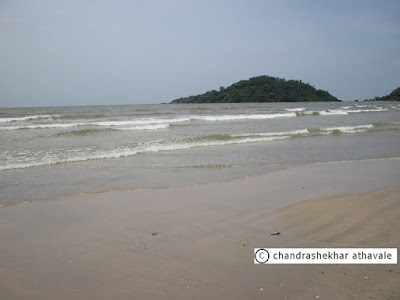 The sun was already setting yet we had no intention of wasting our first evening in Goa just sitting in our air conditioned rooms. 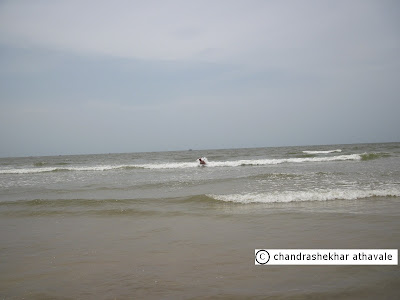