I open my eyes and look at the watch. It is only 5 o' clock in the morning. The weather in Coorg, is temperate and fine. Even at the peak of the summer, temperature rarely crosses 30 or 31 degree Celsius. The nights also are not very cold. All along the day and even in night one feels very comfortable here. When I went to sleep last night, I felt like covering myself with just a light blanket. Since the weather is so comfortable, I had never expected to wake up so early in the morning, yet I am fully awake at this unearthly hour for no reason. I suddenly realize then that I have been woken up by some kind of weird noises. Outside my suite, there is a high volume din and clamour from somebody. This sound has woken me up. I get up and slide the thick curtains on the french window. It is still dark outside. Dawn has not yet reached the heavily wooded surroundings of my resort. Every thing appears so calm and quiet. Yet there is blaring going on outside. I am very curious and open the balcony door. The sound just fills my suit like a storm surge. I had never understood previously, the true meaning of the word 'Cacophony'. Listening to this strange sound, I feel that I have now really understood what Cacophony means? After listening carefully, I can make out individual sounds of chirping, cooing,squawking, hooting and warbling, going all around me. It is fascinating to hear the bird songs so clearly, and so early in the morning. My suite in this resort is surrounded on three sides by dense growth of shrubs. Behind these shrubs there are groves of large trees. All this sound is coming from the birds hiding in the trees. 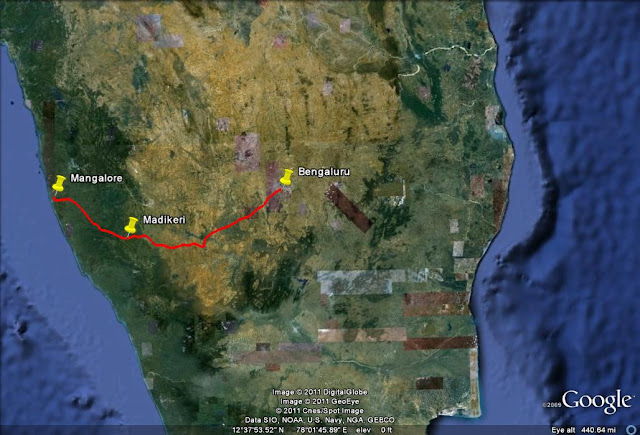 Our resort is located near Medikeri town in Coorg district of the state of Karnataka in India. Medikeri town is well connected by road to two major cities of Karnataka. From Manglore, a city on west coast, the distance to Medikeri is about 125 Kilometers, whereas the distance from Bengaluru (the route by which we travelled.) is about 250 Km. Both these places are connected by air, having good airports. However, Mangalore, being a small city, is not so well connected and very few flights land there. Bengaluru has an international airport and many airlines including budget airlines fly there and offer cheapest flights. 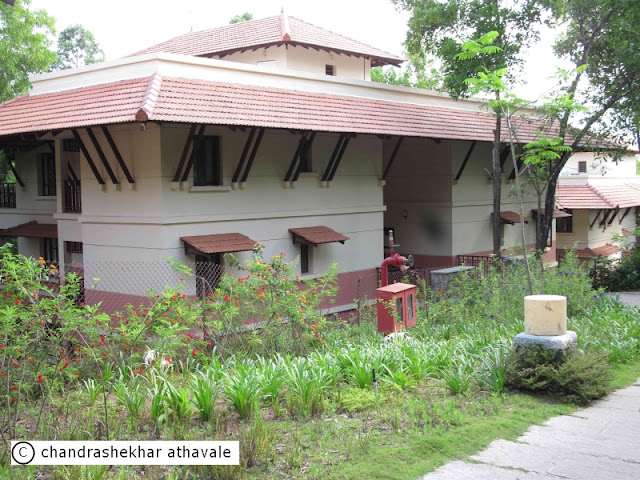 Our Resort in Coorg

This resort, where I am staying, has been constructed in a very nice fashion. The entire resort is situated in a gorge. On the perimeter of this gorge or the highest points are all the residential complexes. Each residential complex having six individual suites on three floors. At a slightly lower height, we have the restaurants and a Fun Zone for the kids. At a still lower level, we have the Adventure Zone a Gymnasium and a Massage Parlour. The residential complexes have been named after very uncommon tropical trees. It is fun to tell others that we are staying in “Jojuba” or “Lokucha”. The over all experience here is very pleasant and provides comfort. 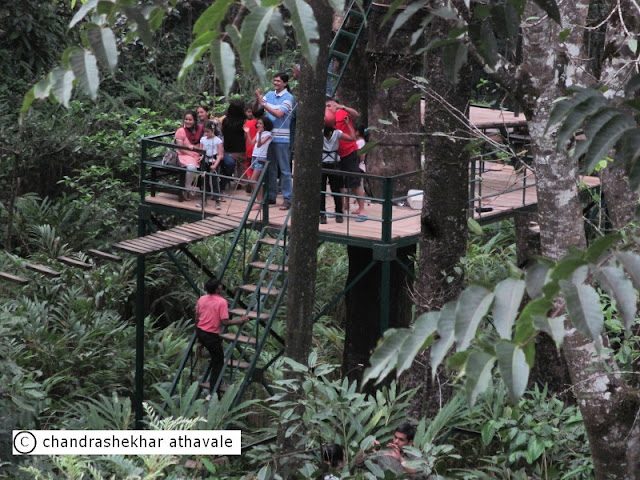 Really speaking, Coorg is an anglicized version of the original name “Kodagu” in the local dialect. Even though Coorg is part of Karnataka state, the culture of the people resembles more to the culture of the people of the next door Kerala state. If you ask one of the locals regarding the most important place in his Kodagu district, the probable answer would be 'TalKaveri' and it should not raise any eyebrows. The 'Kaveri' river has the same kind of importance in this part of the world that river 'Ganga' or 'Ganges' has in north India. Commoners in the north, call affectionately, the river 'Ganga' as 'Mother Ganga'. Similarly 'Kodagu' people address their 'Kaveri' river as 'Kaveri Tai' or 'Mother kaveri'. The source or headwaters of this 'Kaveri river is located at a place called 'Tal Kaveri' and this place happens to be located very much in the Coorg district itself. Naturally, this place has similar religious importance, here in south India, as the source or headwaters of 'Ganga' river, located at 'Gangotri' in the Himalayas has in north India. Kaveri river flows from its origin at Tal Kaveri towards east, first near Shrirangapattan ( which we passed by, on our way to Coorg from Bengaluru.), where a dam has been built on the river. The lake formed here is known as 'Krishnaraj sagar' after a past Mysore state king, and the famed 'Vrindawan gardens' are also located near this lake. The second most important dam on Kaveri river is at 'Mettur” in the state of Tamil Nadu. The river finally joins the Bay of Bengal' near 'Tanjore'. 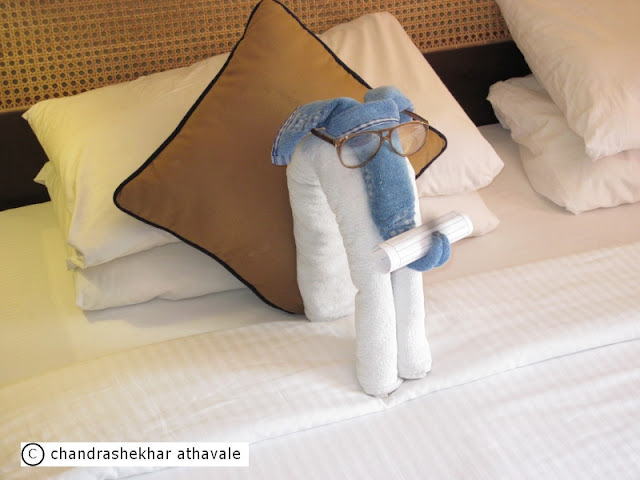 Considering the effect and importance this river has on the lives of the Kodagu people, I decide to start my escapades here in Kodagu with the birth place of the river at 'Tal Kaveri'.

All our plans to start early for Talkaveri actually go haywire and the clock shows 11 o'clock in morning, when we finally depart. We take a narrow hilly kind of road roughly going in south-west direction. There are just too many curves on this road, yet our SUV driver keeps driving as if he is driving a Maruti 800 car. (one of the micro cars available in India.) We take our first halt, after we travel a distance of about 40 Km from Medikeri. Our driver says that there is a confluence of three rivers just a small distance away.

This confluence is a total and complete disappointment. Leave alone the confluence of Ganga with Jamuna at Alahabad. Compared to this place the confluence of Mula and Mutha rivers near my home town of Pune, could be considered as colossal. This really is a confluence of two canals. Out of the three rivers supposed to be there, I could see the beds of Kaveri and Kanika rivers. The third river known as Sujyoti is conspicuously absent. I ask one of the votaries, who is worshiping the river bed. He tells me that the third river is actually hidden from view of mortals. Since I can not claim to have any other qualifications except that of a mortal, there is nothing further to ask. Just near the confluence, I can see a fairly big temple complex. The temple has a style which is distinctly from Kerala. The main gate to the temple complex is huge and highly decorated and carved. Inside the complex, I can see number of small temples of miniature size, dedicated to various idols. I ask another votary about the names of idols. He comes out with a list of names like Ishavar, Bhangadeshwar, which I have never heard before. Finally, I find a name plate written in English and find out the name of the main idol to whom this temple is dedicated. He is called as 'Bhagamandaleshwar.'

After this short break, we are again motoring to our destination; the head waters of river Kaveri. We start climbing another hilly road again. The terrain changes again with thick foliage all around, just like Coorg. About 4 Km away, I can see a parking lot with number of cars parked. There are number of shanty shops on one side, all of them selling the stuff like flowers and fragrant sticks used in worshiping of the idols by votaries. All shops have one thing common. They have their own public address systems, over which they play religious songs and ballads praising the River Kaveri. Ahead of me is a huge and wide gate with number steps for approach.

Continuing to listen to the ballads, all praising sister Kaveri, I climb up the steps. There is a deep pit there lined with marble tiles. There is also a water outlet shaped like head of a cow or a bull and water from the pit flows into another pit through the mouth of this cow/ bull, whatever it is, and then just becomes untraceable. This trickle of water falling out of the pit, at a height of 3700 feet from mean sea level, is considered as head waters of Kaveri river; one of the mightiest river systems of south India. There is also a temple dedicated to river Kaveri. The photography of this temple is apparently prohibited. The logic behind this rule is something that I just fail to understand. Many votaries appear to be worshiping the idol of Kaveri river. There are also number of other miniature temples, dedicated to assorted idols again. One thing is to be however appreciated. The entire temple complex is completely clean and tidy and surroundings are extremely picturesque. It is a great pleasure to just look around and see the panoramic views.

The votaries say that the river after disappearing from the pit on the hill, only makes an appearance again, just near the confluence at ' Bhagamandaleshwar' temple, visited by me earlier. Since, I can not prove otherwise, I assume that it must be true. It is always an impossible task to try and find the head waters of a river. Near my home town, there is a place called 'Mahabaleshwar,' they say that you can see head waters of five rivers there all originating from the same temple and then flowing in different directions. One can see at least 5 independent rivulets there, flowing in different directions. Here at Tal Kaveri, there is nothing to see.

Just on the side of the head waters of Kaveri river, I see number of steps in the range of 200-300, which go up a hill all the way. This hill is called as 'Bramhagiri Hills.' I decide to take up the climb , just brushing aside any thoughts of aftereffects like pain in the legs etc. I actually succeed climbing to the top quite easily, though I take number of mini halts on my way. As I look around in a 360 degree view, my mind gets filled with an unknown joy and delight. The hill top is about 200 feet up from the headwaters of Kaveri. The top is not actually large, could be a circle of about 25 feet diameter. But the 360 degree view of the hill tops and vales covered with thick dark green foliage is unbelievably grand and majestic. It is always possible to have this kind of grand view from an aircraft in flight. But to see something similar from the ground itself is something very unique and rare. I feel happy with this close contact with nature's bounty here and feel that today's excursion has been a worth while exercise after all.

We decide to have our lunch at some odd hotel in Medikeri. The plan is immediately rejected by our driver, who says that there are no places to eat, worth a visiit in Medikeri. I am rather surprised at his opinion, but finally give my consent to return to our resort. We order our lunch with a minute to spare before closing time of the kitchen of the resort restaurant at 3.30 PM. After lunch, I realize that my legs are now complaining about the climb. I hit the bed and wake up only late evening for some tea.