A Road too far! 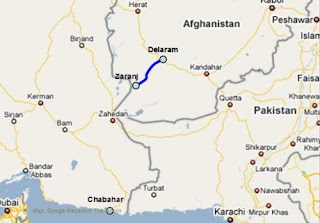 In the beginning of the year 2009, a slightly weird news was published by the Indian media. According to this particular news,  Mr Hamid Karzai , the president of Afghanistan and Mr. Pranab Mukharji, the then External Affairs Minister, Government of India,  had jointly inaugurated a 218 Km long road from Delaram ( Capital of Nimroj Province in Afghanistan) to Zaranj , a city on the border between Iran and Afghanistan. The road was entirely constructed with funds provided by India to the tune of US$150 million and was built completely by Indian engineers with materials imported from India.  On the face of it, I wondered as to why, a road between Afghanistan and Iran was built by India, with funds provided entirely by Indian Government.
This really made me curious and I searched the net for any possible references. I did find quite a few and realized that the plan to construct this road was in fact a fantastic strategic move in International Politics. A major road network, called Necklace road, has been constructed in Afghanistan, linking all major cities from Herat to Kandahar-Kabul-Mazar-i-Sharif. The city of Delaram, is located on this road between Herat and Kandahar. This new link road built by India, effectively connects city of Zaranj, located on Iranian border, with all major cities in Afghanistan.
City of Zaranj, happens to be just North off, and that too not very far, from Chabahar, a brand new Port developed by Iran in Indian Ocean. In fact, Iran has already constructed a bridge, across Helmand River flowing near Zaranj, and a road from there to Chabahar Port.
In reality, building this link road, was a major challenge for India. Some 300 workers and Engineers of Border Roads Organization had to put in very hard work to complete this work. Due to continuous terrorist activities of ‘Taliban’, providing security for this work force, was a very tough task and was effectively done by about 400 Jawans of Indo-Tibet Border Police. According to Brig. P.K.Sehgal, Director of this project, they could effectively work for only 4 to 5 hours every day because of continuous dust storms and temperatures reaching 55 degrees Celsius. The water required for the works and the workers had to be transported from long distances.  As expected, because of denial by Pakistan, all machinery and materials for the project had to be transported from India to the Port of Bandar-i-Abbas in Iran and from there by road over a long distance to work site.

Why this road is so important? Afghanistan is a land locked country. Which means that all trade has to be carried through some other country? Due to very hilly terrain in North, most of the goods move back and forth from Afghanistan through Karachi port in Pakistan by Peshawar – Khyber pass – Kabul route. Pakistan creates infinite number of hurdles in this movement of goods, like not allowing the goods to move from Karachi under some pretext or other. There is substantial pilferage of goods, which find their way to Peshawar market. Pakistan can also create instant shortages of essential commodities in Afghanistan.
This new road now directly provides an easier and shorter alternative to Pakistan route. For India, this route is of paramount importance because in the first place, since Pakistan refuses to allow any Indian goods to pass through on the way to Afghanistan and secondly this can become the entry point for trade with Central Asian states.
A Tripartite agreement was signed between India, Iran and Afghanistan in 2003. According to this agreement, India agreed to help with Technology and Funds for development of Chabahar port and adjoining road network. Iran has offered the Chabahar port to India for trade with Afghanistan and Central Asian states at concessional  rates. Iran gets free use of Delaram-Zaranj road for trade with Central Asia. At Chabahar port, Afghanistan exporters get 90% discount on port fees and 50% reduction in warehouse charges. Afghan truck operators have been given full access on roads in Iran. It is interesting to note that Pakistan already has been forced to reduce port charges at Karachi, due to competition. In fact, this is a win-win situation for all.

Iran has since declared the Chabahar port as free trade area, making things even easier for concerned parties. Another interesting aspect of Chabahar port is, it’s vicinity to Gwadar port, being developed by Pakistan with help from China. Chabahar port is located just west of Gwadar port. Planners in Pakistan are already talking of possible preference by shipping lines to Chabahar, because of Baloochi unrest in Pakistan.
For India, this is a landmark event, as trade with Afghanistan and central Asia no longer depends on whims of Pakistan and can grow to any extent. All this has become possible because of great foresight shown by Indian Government and terrific work by Border Roads Organization. My hats off to those strategic planners in the Government and also to workers of BRO and ITBF who unfortunately lost ten of their personnel in this hazardous job.
10 July 2009
at 7:51 AM