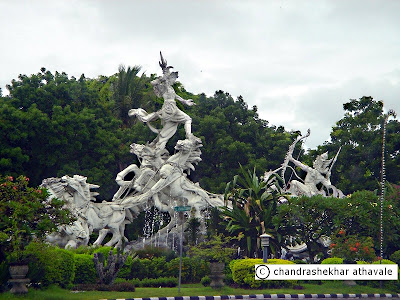 A Mahabharat Story; Ghatotkacha fights Karna
The flight to Bali is crowded with people from all corners of the world. I try to communicate with a German couple, sitting next to me. The attempt is largely unsuccessful as their knowledge of English and my knowledge of Deutsch are more or less at the same level. After finding out that I am from India, they immediately draw the conclusion that I must be a computer expert. After some effort, I manage to convince them that I have retired and do not work for living any more. Besides, my knowledge of computers is also at a very rudimentary level. We manage to make friends as they are also in the same situation. The lady keeps on chattering something unintelligible, for the rest of the flight.

The aircraft makes a smooth landing on Nagurah Rai Airport. As we taxi towards the tarmac, I look out of the window. What I see, really impresses me. This little airport is unbelievably clean and well laid out.  Not something expected in a third world country. The airport buildings are clean and freshly painted. The usual dharavi style zopadpatti, which encircles the Mumbai airport, is totally absent here. The green grass patches between concrete pavements appear well cut and maintained. I also dont see aircraft gear, such as ladders, cargo trolleys, lying here and there in a disorganized manner. The aircraft comes to a halt. I come out of the aircraft through an aero bridge. I can not believe my eyes. Even today, much aclaimed Bangalore International airport has managed to get only a couple of them 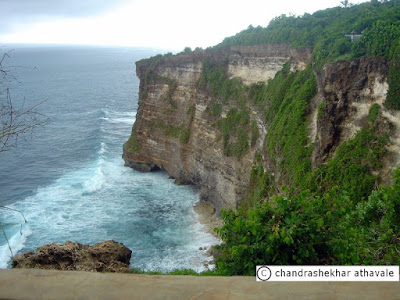 Indian Ocean as seen from Ulwatu temple
On my way back, I visit a modern show room of ceramics. The range of products is simply stunning. The Balinese touch given to these articles of daily use by the local artisans is something unique and extra ordinary. 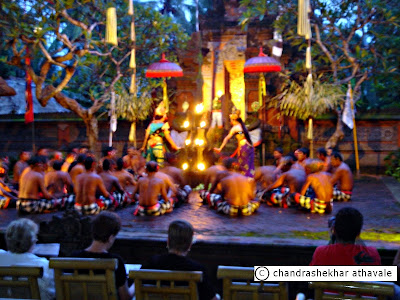 Kechak dance of Bali
The time is six-thirty in the evening and I am eagerly waiting for the start of Kechak, the exclusive Balinese dance performed by Sahadeva dance academy. The spectator gallery is multi storied and spartan. Bamboo topped benches and chairs are provided for sitting. The open stage is constructed with stones and surfaced with mud. At the center of the stage there is a Deep mala burning several oil lamps. The entire arrangement gives a certain authentic and haunting appearance. The sky is already dark with rain bearing nimbus clouds and it could rain any time. I wonder about the prospects of the dance performance if rain gods appear again. About hundred men now pour on the stage. They wear checkered Sarongs and squat down in a semi circle. The dance guru appears and blesses them. The choir starts to sing softly some words which sound like Chuk, Chuk in a rhythm. There are no musical or beat instruments. The effect is spectacular. As if given a cue, the raindrops start falling and King Rama and his queen Sita appear on the stage. Their attire is bright and East Asian. The dance poses are quite striking. The moods and feelings of characters are conveyed through movements of wrists and fingers. King Ramas anger, Sitas fear is expressed through their trembling fingers. The choir changes the rhythm. The story of Ramayana slowly unfurls before our eyes. The end however is little different. The monkey king Sugreeva kills the demon king Ravana as King Rama serenely looks upon them. There are few more dances and the finale is provided by a dance on burning coconut husks.

For dinner, I decide to visit Gimbaran fresh sea food court. The place is almost touching the sea and is very windy because of the high tide. The sea food is kept live in huge water tanks. I am asked to select the fish or prawn or whatever I want to eat. It would be cooked and served to me. I find that whole concept quite unpalatable and decide to return to my hotel to have some familiar Nasi Padang.
Next day, I catch my return flight. Images of Bali stay with me.
at 9:59 AM